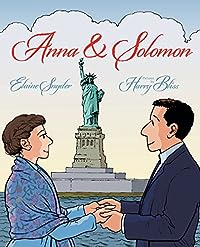 In 1897 a young man named Solomon fell in love with and married a beautiful young woman named Anna. They lived in Russia, which was dangerous at that time for a Jewish family, so Solomon moved to the United States, where he worked and saved until he had enough money to send Anna a ticket for the voyage across the ocean. But when Solomon went to meet Anna's ship, Anna's younger brother was waiting for him. Solomon took in her brother and worried and saved until he could send the money for Anna's passage again - but this time, Anna's older brother was waiting. When Solomon sent the money a third time and Anna's mother arrived, Solomon wondered if he would ever see his dear wife again.

LibraryThing member Sullywriter
Charming story about the journey of the author's grandparents from turn of the century Russia (present-day Belarus) to New York.

Chik Chak Shabbat by Mara Rockliff
Shanghai Sukkah by Heidi Smith Hyde
Goldie Takes a Stand: Golda Meir's First Crusade by Barbara Krasner
Joseph and the Sabbath Fish by Eric A. Kimmel
Sara Finds a Mitzva by Rebeka Simhaee
34 more
New Month, New Moon by Allison Ofanansky
I Say Shehechiyanu by Joanne ; illustrated by Monika Filipina Rocklin
Apple Days: A Rosh Hashanah Story a Rosh Hashanah story by Allison Soffer
Sadie, Ori, and Nuggles Go to Camp (Sadie and Ori) by Jamie Korngold
Sammy Spider's New Friend by Sylvia A. Rouss
What a Way to Start a New Year! A Rosh Hashanah Story by Jacqueline Jules
All Kinds of Strong by Sharon Reiss Baker
My Grandfather's Coat by Jim Aylesworth
Sadie's Lag Ba'omer Mystery by Jamie S. Korngold
First Rain by Charlotte Herman
Rifka Takes a Bow by Betty Rosenberg Perlov
Pavel and the Tree Army by Heidi Smith Hyde
The Cats on Ben Yehuda Street by Ann Redisch Stampler
Gittel's Journey: An Ellis Island Story by Leslea Newman
The Castle on Hester Street by Linda Heller
Yaffa and Fatima: Shalom, Salaam by Fawzia Gilani-Williams
The Knish War on Rivington Street by Joanne Oppenheim
Sadie and the Big Mountain by Jamie S. Korngold
Rabbi Benjamin's Buttons by Alice B. McGinty
Yuvi's Candy Tree by Lesley Simpson
And Then Another Sheep Turned Up by Laura Gehl
The Littlest Mountain by Barbara Rosenstock
Not This Turkey! by Jessica Steinberg
The Always Prayer Shawl (autographed copy) by Sheldon Oberman
Everybody Says Shalom by Leslie Kimmelman
The Only One Club by Jane Naliboff
The Key from Spain: Flory Jagoda and Her Music by Debbie Levy
A Song for My Sister by Lesley Simpson
Here is the World: A Year of Jewish Holidays by Leslea Newman
Baxter, the Pig Who Wanted to be Kosher by Laurel Snyder
The Mountain Jews and the Mirror by Ruchama King Feuerman
Tashlich at Turtle Rock by Susan Schnur
Red, Blue, and Yellow Yarn: A Tale of Forgiveness by Miriam R. Kosman
Sammy Spider's First Yom Kippur by Sylvia A. Rouss
Fewer