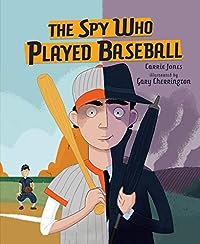 Moe Berg is not a typical baseball player. He's Jewish--very unusual for the major leagues in the 1930s--has a law degree, speaks several languages, and loves traveling the world. He also happens to be a spy for the U.S. government. When World War II begins, Moe trades his baseball career for a life of danger and secrecy. Using his unusual range of skills, he sneaks into enemy territory to gather crucial information that could help defeat the Nazis. But he also has plenty of secrets of his own. . .

Shmulik Paints the Town by Lisa Rose
The Language of Angels: A Story About the Reinvention of Hebrew by Richard Michelson
The Length of a String by Elissa Brent Weissman
Roller Coaster Grandma by Dr. Ruth K. Westheimer;Pierre Lehu
Dreidels on the Brain by Joel ben Izzy
11 more
Potatoes at Turtle Rock by Susan Schnur
How It's Made: Matzah by Allison Ofanansky
Goldie Takes a Stand: Golda Meir's First Crusade by Barbara Krasner
Sadie's Lag Ba'omer Mystery by Jamie S. Korngold
Engineer Arielle and the Israel Independence Day Surprise by Deborah Bodin Cohen
Like a Maccabee by Barbara Bietz
Moe Berg: The Spy Behind Home Plate by Vivian Grey
A Turn for Noah: A Hanukkah Story by Susan Remick Topek
Moti the Mitzvah Mouse by Vivian Bonnie Newman
Sarah's Passover by Lisa Bullard
Tot Shabbat by Camille Kress
Fewer