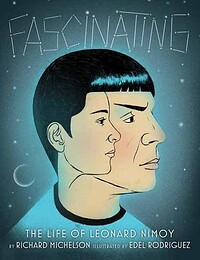 Fascinating: The Life of Leonard Nimoy

A moving biography of the late Leonard Nimoy, the iconic Spock from Star Trek,whose story exemplifies the American experience and the power of pursuing your dreams. Once there was a boy named Leonard who loved to sing and to act. His parents were immigrants who felt like aliens in America, and certainly didn't understand Leonard's drive to perform. "Learn to play the accordion," his father told him. "Actors starve, but at least musicians can eke out a living." But Leonard reached for the stars . . . and caught them. He moved to Hollywood, where he took acting lessons, and drove a taxi and took every role he could get. He worked hard, learned his lines, showed up on time, and studied his craft. Until one day he was offered the role of an alien science officer on a new TV show called Star Trek.Leonard knew what it felt like to be an alien. But did he want the role? Fascinating is the story of how one boy followed his dreams to become one of the most beloved figures of our time.… (more)

LibraryThing member AbigailAdams26
This engaging picture-book biography follows the story of Leonard Nimoy, the son of immigrants, who would eventually become one of the great American (and World) icons of the 20th century. Growing up in working-class Boston, Lenny discovered his love of performance and the arts through the local
Show More
settlement house, taking every opportunity to audition for and act in plays. Eventually deciding to become a professional actor, he followed his dream west, leaving Boston for Hollywood, where he studied acting and began performing in television and films. Then his big break came: he was offered the role of Spock, an alien officer in a science-fiction space exploration television drama called Star Trek. His performance in this role was informed by his experiences growing up the son of people who felt that they were aliens in their adopted country, and by the mystical side of his Jewish faith, and would create a figure - Mr. Spock - that millions would come to love and to identify with...

As someone who has been a passionate Star Trek fan since my early adolescence, someone who has watched every television series and every movie, someone who has read countless Star Trek novels, someone who taught herself Klingon (yes, you can buy instructional material for this fictional language from the Star Trek universe), I was incredibly excited when Fascinating: The Life of Leonard Nimoy came to my attention. Something that combined my love of Star Trek with my interest in children's books? What's not to love! As it turns out, the narrative here is quite engaging, successfully drawing out the parallels between Leonard Nimoy's own experiences and the fictional role that made his face known around the world. There wasn't much here that I didn't already know, but for those new to the subject, Richard Michelson's narrative will prove quite informative. The artwork by Edel Rodriguez is likewise appealing, moving from more sedate sepia tones, in the section of the book devoted to Nimoy's youth, to the bluer tones that parallel his exploration of Hollywood and (through the character of Spock) of space. The final two-page spread, in which Spock, in his Starfleet uniform, is lifting the ta'al (the traditional Vulcan salute), is just magical!

All in all, a wonderful addition to the field of picture-book biography, one I would recommend to young Star Trek fans, to young would-be actors, and to anyone looking for children's stories featuring the immigrant experience in America.
Show Less
4 more
LibraryThing member TBE
Once there was a boy named Leonard who loved to sing and to act. His parents were immigrants who felt like aliens in America, and certainly didn’t understand Leonard’s drive to perform. “Learn to play the accordion,” his father told him. “Actors starve, but at least musicians can eke out
Show More
a living.”

But Leonard reached for the stars . . . and caught them. He moved to Hollywood, where he took acting lessons, and drove a taxi and took every role he could get. He worked hard, learned his lines, showed up on time, and studied his craft. Until one day he was offered the role of an alien science officer on a new TV show called Star Trek. Leonard knew what it felt like to be an alien. But did he want the role?
Show Less
LibraryThing member Lisa2013
This is a good biography of the man. I know of him as Spock on the original Star Trek series and that’s why I was interested. Overall, I think this book will be of most interest to adults and young people who know that series or know of Nimoy’s work in other areas. But it’s a good book for
Show More
some children who have never heard of him and have never seen anything Star Trek too, especially children that come from recently immigrated families or that live in poverty, especially those who have dreams, especially those who have interest in music, acting, directing, art, and other creative pursuits. Jewish children might also appreciate it.

I learned a lot about the man. He was impressive. I love the origin of the Vulcan greeting that Nimoy chose. Fun fact!

At the end there is 2 pages of straight text with more detailed biographical information and an author’s note with photograph or the author & Nimoy.
Show Less
LibraryThing member DonnaMarieMerritt
Not to be redundant, but Fascinating was indeed fascinating. I loved learning about "Lenny's" early life, where his trademark Spock hand sign originated, his father's advice as he left for Hollywood (too funny), and his encounter with a famous politician that kept him moving forward just as he was
Show More
ready to give up on an acting career. I found the end notes and author's note as equally engaging as Michelson's main story. Rodriguez's illustrations add a delightfully nostalgic touch.
Show Less
LibraryThing member melodyreads
Nicely written for kids!!
Fewer

Fascinating: The Life of Leonard Nimoy by Richard Michelson (Book)

Goldie Takes a Stand: Golda Meir's First Crusade by Barbara Krasner
Dreidels on the Brain by Joel ben Izzy
The Language of Angels: A Story About the Reinvention of Hebrew by Richard Michelson
The Wooden Sword: A Jewish Folktale from Afghanistan by Ann Redisch Stampler
Ketzel, the Cat Who Composed by Leslea Newman
22 more
The Yankee at the Seder by Elka Weber
Five Little Gefiltes by Dave Horowitz
Here is the World: A Year of Jewish Holidays by Leslea Newman
Stones for Grandpa by Renee Londner
The Cats on Ben Yehuda Street by Ann Redisch Stampler
The Champion of Children: The Story of Janusz Korczak by Tomasz Bogacki
The Mountain Jews and the Mirror by Ruchama King Feuerman
I Dissent: Ruth Bader Ginsburg Makes Her Mark by Debbie Levy
Yaffa and Fatima: Shalom, Salaam by Fawzia Gilani-Williams
Apple Days: A Rosh Hashanah Story a Rosh Hashanah story by Allison Soffer
Netta and Her Plant by Ellie Gellman
Cheesecake for Shavuot by Allison Ofanansky
The Mitten String by Jennifer Rosner
Rabbi Harvey Rides Again: A Graphic Novel of Jewish Folktales Let Loose in the Wild West by Steve Sheinkin
The Longest Night: A Passover Story by Laurel Snyder
The Secret Shofar of Barcelona by Jacqueline Dembar Greene
Rifka Takes a Bow by Betty Rosenberg Perlov
The Littlest Mountain by Barbara Rosenstock
A Song for My Sister by Lesley Simpson
The Patchwork Torah by Allison Ofanansky
Gittel's Journey: An Ellis Island Story by Leslea Newman
First Rain by Charlotte Herman
Fewer