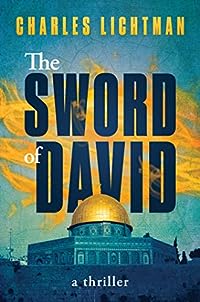 The Sword of David

An action-packed thriller, The Sword of David tells the story of an Israeli commando traveling across the globe, following clues in search of a major biblical treasure that could change the destiny of the world. Chaim Klein--a fearless Israeli Special Forces officer--has his hands full. After Klein unexpectedly finds the long-lost Ark of the Covenant, he must then search the globe for the Ten Commandments tablets. Klein must also confront and stop a consortium of Islamic states and terrorist organizations who are planning a simultaneous attack that would obliterate dozens of Western cities and Israel. Along the way, he comes across the mystical and awe-inspiring Sword of David. In this nonstop action-packed thriller, which draws on supernatural elements, Klein and his crew visit Ethiopia, London, Paris, Lebanon, and Rome. We also see the terrorists plotting in the West Bank, Saudi Arabia, Afghanistan, and Istanbul. The final climactic confrontation between Klein and the terrorists is unexpected and inspirational. In The Sword of David, you will meet colorful characters--including Rafsani, the terrorist who trained under the infamous Carlos the Jackal; the Israeli spy Galit who works undercover in Paris under the alias Sister Chloe; Baroness Collins, who has an important position in the UK government as well as being the head of a secret organization long thought to be defunct; a renegade CIA operative; a Palestinian once nominated for the Nobel Peace Prize; and the Palestinian's terrorist grandson. Based on the author's painstaking research of biblical artifacts, religion, history, and terrorism, The Sword of David feels authentic and current.… (more)

LibraryThing member Amusedbythis
Great thriller. This fast paced novel combines intrigue, ancient prophecy and current global conflict. An archeological find in the Old City of Jerusalem brings a quest to discover another antiquity. The journey takes the protagonist throughout the globe, encompassing both terrorism and a desire
Show More
for peace. This is a great read.
Show Less
1 more
LibraryThing member HandelmanLibraryTINR
An action-packed thriller, The Sword of David tells the story of an Israeli commando traveling across the globe, following clues in search of a major biblical treasure that could change the destiny of the world.
Fewer