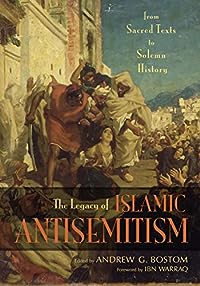 Legacy of Islamic Antisemitism: From Sacred Texts to Solemn History

Exceedingly well organized and extensively documented....-CHOICEThe publication of the present anthology of primary sources and secondary studies on the theme of Muslim antisemitism is a groundbreaking event of major scholarly, cultural, and political significance. Editor Andrew Bostom has mined the relevant literature to produce the fullest record on this subject in existence. After the publication of his work, all the oft-repeated, but erroneous misunderstandings of a tolerant Islam, and of a medieval Jewish-Muslim ''golden age'' will need to be permanently retired. Everyone interested in Jewish and Islamic history, as well as current events in the Middle East, should read this book - and soon.-Steven T. Katz, Director, Elie Wiesel Center for Judaic Studies, Boston University, and author of Post-Holocaust Dialogues and The Holocaust in Historical ContextThe antisemitism of the Muslim Middle East that we hear, see, and experience daily - from the racist cartoons to the constant chorus of ''pigs and apes'' - is often attributed to European origins, as if the radical Muslim world learned this endemic hatred through the tragedy of imperialism and colonialism. In fact, a deep suspicion and frequent loathing of Jews is deeply rooted in the Middle East, antedating European rule and sometimes evidenced in passages in the Koran and early holy Islamic texts.... Andrew Bostom produces a vast literature of Middle Eastern Islamic antisemitism, and critics may be as surprised at his conclusions as they are unable to refute his carefully compiled corpus of evidence.-Victor Davis Hanson, Senior Fellow, The Hoover Institution, Stanford University, author of Carnage and Culture and A War Like No OtherThis comprehensive, meticulously documented collection of scholarly articles presents indisputable evidence that a readily discernible, uniquely Islamic antisemitism-a specific Muslim hatred of Jews-has been expressed continuously since the advent of Islam. Debunking the conventional wisdom, which continues to assert that Muslim animosity toward Jews is entirely a 20th-century phenomenon fueled mainly by the protracted Arab-Israeli conflict, leading scholars provide example after example of antisemitic motifs in Muslim documents reaching back to the beginnings of Islam.The contributors show that the Koran itself is a significant source of hostility toward Jews, as well as other foundational Muslim texts including the hadith (the words and deeds of Muhammad as recorded by pious Muslim transmitters) and the sira (the earliest Muslim biographies of Muhammad). Many other examples are adduced in the writings of influential Muslim jurists, theologians, and scholars, from the Middle Ages through the contemporary era.These primary sources, and seminal secondary analyses translated here for the first time into English-such as Hartwig Hirschfeld''s mid-1880s essays on Muhammad''s subjugation of the Jews of Medina and George Vajda''s elegant, comprehensive 1937 study of the hadith-detail the sacralized rationale for Islam''s anti-Jewish bigotry. Numerous complementary historical accounts illustrate the resulting plight of Jewish communities in the Muslim world across space and time, culminating in the genocidal threat posed to the Jews of Israel today.Scholars, educators, and interested lay readers will find this collection an invaluable resource for understanding the phenomenon of Muslim antisemitism, past and present.FURTHER PRAISE FOR THE LEGACY OF ISLAMIC ANTISEMITISM:Stimulating and informative: a fascinating and disturbing voyage of historical discovery.... It is magnificent.-Martin Gilbert, official biographer of Winston ChurchillAuthor of Never Again: A History of the Holocaustand The Jews of Arab Lands: Their History in Maps[Bostom''s] eye-opening anthology should become an essential resource.-Ilan Stavans, Lewis-Sebring Professor in Latin American and Latino Culture and Five-College 40th Anniversary Professor, Amherst CollegeDr. Andrew Bostom has written a… (more)

Islam And The Jews: The unfinished battle by Mark A. Gabriel