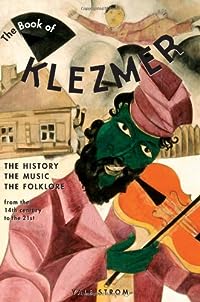 The Book of Klezmer: The History, the Music, the Folklore

Klezmer is Yiddish music, the music of the Jews of Europe and America, a music of laughter and tears, of weddings and festivals, of dancing and prayer. Born in the Middle Ages, it came of age in the shtetl (the Eastern European Jewish country town), where "a wedding without klezmer is worse than a funeral without tears." Most of the European klezmorim (klezmer players) were murdered in the Holocaust; in the last 25 years, however, klezmer has been reborn, with dozens of groups, often mixing klezmer with jazz or rock, gaining large followings throughout the world. The Book of Klezmer traces the music's entire history, making use of extensive documentary material; interviews with forgotten klezmorim as well as luminaries such as Theodore Bikel, Leonard Nimoy, Joel Grey, Andy Statman, and John Zorn; and dozens of illuminating, stirring, and previously unpublished photographs.… (more)

A Convenient Hatred: The History of Antisemitism by Phyllis Goldstein
The Shengold Jewish Encyclopedia by Mordecai Schreiber
The Kugel Valley Klezmer Band by Joan Betty Stuchner
Mendel's Accordion by Heidi Smith Hyde
The Wedding That Saved a Town (Kar-Ben Favorites) by Yale Strom
5 more
The Jews in America: The Roots, History, and Destiny of American Jews by Max I. Dimont
Deborah, Golda, and Me: Being Female and Jewish in America by Letty Cottin Pogrebin
Yiddish: A Nation of Words by Miriam Weinstein
The Jewish Fake Book by Velvel Pasternak
I am Jewish: Personal Reflections Inspired by the Last Words of Daniel Pearl by Judea Pearl
Fewer