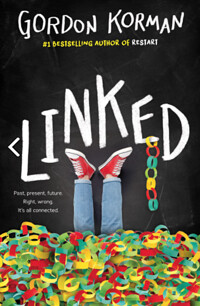 You can't deny something is wrong when it's right there in front of you. Link, Michael, and Dana live in a quiet town. But it's woken up very quickly when someone sneaks into school and vandalizes it with a swastika. Nobody can believe it. How could such a symbol of hate end up in the middle of their school? Who would do such a thing? Because Michael was the first person to see it, he's the first suspect. Because Link is one of the most popular guys in school, everyone's looking to him to figure it out. And because Dana's the only Jewish girl in the whole town, everyone's treating her more like an outsider than ever. The mystery deepens as more swastikas begin to appear. Some students decide to fight back and start a project to bring people together instead ofdividing them further. The closer Link, Michael, and Dana get to the truth, the more there is to face--not just the crimes of the present, but also the crimes of the past. With Linked, Gordon Korman, the author of the acclaimed novel Restart, poses a mystery for all readers where the who did it? isn't nearly as important as the why?… (more)

LibraryThing member True54Blue
I appreciate that Korman wanted to make a point with this book but the topic doesn't suit his writing style.

How to Find What You're Not Looking For by Veera Hiranandani
Willy & Max: A Holocaust Story by Amy Littlesugar
White Bird: A Wonder Story by R. J. Palacio
Best Friends by Elisabeth Reuter
People Love Dead Jews: Reports from a Haunted Present by Dara Horn