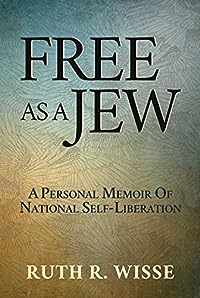 Free as a Jew: A Personal Memoir of National Self-Liberation

"Ruth Wisse's intellectual autobiography is a lasting work of profound moral force and scathing political discernment.... Its illuminations are likely to be as urgent one hundred years hence as they are now." --Cynthia Ozick A Jewish child born into the worst of times in Europe grows up during the best of times in North America--only to recognize that it could be moving back in the opposite direction. First came parents with the good sense to flee Europe in 1940 and the good fortune to reach the land of freedom. Their daughter, Ruth, grew up in the shadow of genocide--but in tandem with the birth of Israel, which remained her lodestar. She learned that although Jewishness is biologically transmitted, democracy is not, and both require intensive, intelligent transmission through education in each and every generation. They need adults with the confidence to teach their importance. Ruth tried to take on that challenge as dangers to freedom mounted and shifted sides on the political spectrum. At the high point of her teaching at Harvard University, she witnessed the unraveling of standards of honesty and truth until the academy she left was no longer the one she had entered.… (more)