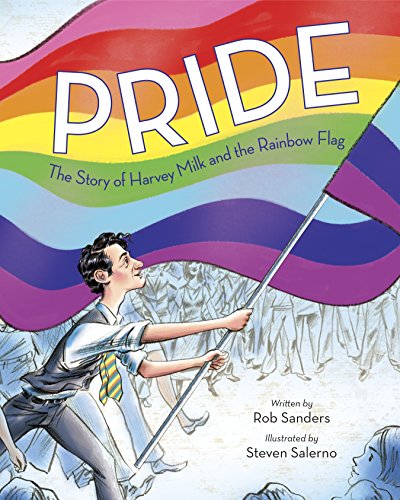 Pride: The Story of Harvey Milk and the Rainbow Flag

In this deeply moving and empowering true story, young readers will trace the life of the Gay Pride Flag, from its beginnings in 1978 with social activist Harvey Milk and designer Gilbert Baker to its spanning of the globe and its role in today''s world. Award-winning author Rob Sanders's stirring text, and acclaimed illustrator Steven Salerno's evocative images, combine to tell this remarkable - and undertold - story. A story of love, hope, equality, and pride. PRAISE FOR PRIDE! "Pride The Story of Harvey Milk and The Rainbow Flagbeautifully tells the history of both Uncle Harvey's dream and his collaboration with Gilbert Baker to create a global symbol of equality and inclusion. This book tells a history that all children will cherish, and will inspire the next generation of hope givers, our world's youth" - Stuart Milk, Founder and President of the Harvey Milk Foundation "Harvey Milk and Gilbert Baker showed LGBTQ people that they should be proud of who they are and who they love. That is exactly what we do at The Trevor Project for LGBTQ youth in crisis. We're thrilled that more young people will learn the story behind the original rainbow flag." - Amit Paley, Trevor Project CEO and Executive Director… (more)

LibraryThing member Zoes_Human
I was tremendously excited when I learned this was coming out, but I must say I am a bit disappointed in the actual book. It's not bad, but there's nothing, other than it filling a needed gap in children's lit, exceptional about it. The art is fine. The prose is fine. It's good, but I wanted greatness. Harvey Milk had greatness, so I wanted that from the book. Perhaps my expectations were too high or even unreasonable, but there they are nevertheless.

I also have a couple of issues with it.

"Even", when used as an adverb, means "used to emphasize something surprising or extreme." So rights for equality for gay people is extreme? "Even" has implications, implications that perhaps the specified person/group may not deserve to be included. Seriously, think about how we use that word in day-to-day life. "Everyone is invited to the party." "Oh god. Everyone? Even my ex?" "Including" would have been a much better choice. I have to wonder where the editor was for that one.

Second, I would have liked to have seen a greater artistic effort made to represent the full diversity of the LGBTQIA community in the drawings of crowds. Transfolks and POC were at the forefront of the movement, and I would love to see greater representation of them and their contributions in history books.… (more)
3 more
LibraryThing member AbigailAdams26
A new picture-book exploration of the story of gay rights activist and community leader Harvey Milk, and the creation of the iconic Gay Pride Flag, this title for younger children introduces some very ungentle realities - chief amongst them, that Milk was assassinated, together with San Francisco mayor George Moscone, in November of 1978 - in a fairly gentle way. Beginning with the famous Milk quotation about giving people hope, the text here discusses its titular hero's desire for a more equal world, one in which gay people would be accepted for who they were. It briefly outlines Milk's political career, as one of the first openly gay people to be elected to public office in the United States, covers his involvement in the genesis of the rainbow flag - it was Milk who suggested to flag creator Gilbert Baker that the gay community needed a symbol to give them hope and pride - and then mentions his murder. The final pages of the book are given over to a history of the flag, after Milk's death, how it grew as a symbol, and was adopted by activists around the country and the world. The book concludes with a biographical note about Milk, and two timelines devoted to Milk and the flag.

Although I tend to agree with those online reviewers who have found Pride: The Story of Harvey Milk and the Rainbow Flag insufficient, as a biography of Milk, I still think the book has great value, in introducing a moment in American history, and the power of the symbol created in that moment. I too would like a more in-depth exploration of Milk's life story - his childhood, his relationships, the people who influenced him, his ideas and beliefs - but I think Rob Sanders' title was intended more as an exploration of his role in one specific historical circumstance (i.e.: the creation of the Pride Flag), than as a full biography. In that sense, it accomplishes exactly what it set out to do, showing Milk's influence on the flag's creator, Gilbert Baker, and the influence of his death on the adoption of that flag by LGBT people. The artwork by Steven Salerno is vibrantly (and appropriately) colorful, creating an immediacy in the illustrations that is striking and powerful. All in all, I think this is an engaging first book for younger children, about the struggle of LGBT people to win full civil rights for themselves, and would recommend it to anyone looking for picture-books about Pride, and the LGBT community and its history.… (more)
LibraryThing member bxr032
Harvey Milk is a story to show students that no matter what they believe or feel they must always stand up for themselves and others like them. Harvey Milk was one of the first openly gay politicians. Little did we know that after Milk's death would his flag be the start of something great. One of the most touching pages in the book I found was "Equality. Pride. Hope. Love. Harvey's dream became a flag for us all."… (more)
LibraryThing member g33kgrrl
I loved this book - at 2 my daughter isn't quite ready to listen to anything this long but I'm really looking forward to reading it to her someday. She'll love the rainbows and I'll love telling her the story of Harvey Milk and the Pride flag.
Fewer

Stonewall: A Building. An Uprising. A Revolution by Rob Sanders
Sewing the Rainbow: A Story About Gilbert Baker by Gayle E. Pitman
This Day in June by Gayle E. Pitman
Julián Is a Mermaid by Jessica Love
They She He Me: Free to Be! by Maya Gonzalez
27 more
Worm Loves Worm by J. J. Austrian
When Aidan Became a Brother by Kyle Lukoff
Prince & Knight by Daniel Haack
When You Look Out the Window: How Phyllis Lyon and Del Martin Built a Community by Gayle E. Pitman
Who Are You?: The Kid's Guide to Gender Identity by Brook Pessin-Whedbee
Neither by Airlie Anderson
We Are Grateful: Otsaliheliga by Traci Sorell
Dreamers by Yuyi Morales
I Am Jazz by Jessica Herthel
It Feels Good to Be Yourself: A Book About Gender Identity by Theresa Thorn
Jacob's New Dress by Sarah Hoffman
Shaking Things Up: 14 Young Women Who Changed the World by Susan Hood
Not My Idea: A Book About Whiteness (Ordinary Terrible Things) by Anastasia Higginbotham
Sparkle Boy by Lesléa Newman
The Youngest Marcher: The Story of Audrey Faye Hendricks, a Young Civil Rights Activist by Cynthia Levinson
Lost and Found Cat: The True Story of Kunkush's Incredible Journey by Doug Kuntz
From the Stars in the Sky to the Fish in the Sea by Kai Cheng Thom
The Day You Begin by Jacqueline Woodson
Planting Stories: The Life of Librarian and Storyteller Pura Belpré by Anika Aldamuy Denise
Jack (Not Jackie) by Erica Silverman
Last Week Tonight with John Oliver Presents a Day in the Life of Marlon Bundo by Jill Twiss
The Boy & the Bindi by Vivek Shraya
Crescent Moons and Pointed Minarets: A Muslim Book of Shapes by Hena Khan
Stella Brings the Family by Miriam B. Schiffer
Under My Hijab by Hena Khan
Introducing Teddy: A gentle story about gender and friendship by Jess Walton
Malala's Magic Pencil by Malala Yousafzai
Fewer