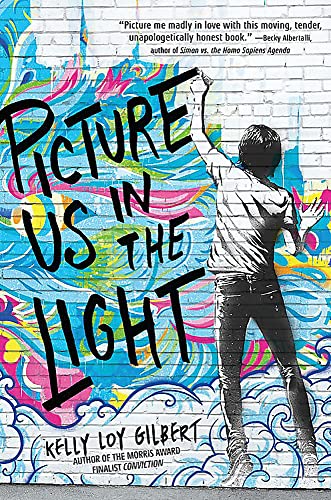 Picture Us In The Light

"Picture me madly in love with this moving, tender, unapologetically honest book." -Becky Albertalli, #1 best-selling author of Simon Vs. the Homo Sapiens Agenda Winner of the California Book Award and Stonewall Honor! Danny Cheng has always known his parents have secrets. But when he discovers a taped-up box in his father's closet filled with old letters and a file on a powerful Bay Area family, he realizes there's much more to his family's past than he ever imagined. Danny has been an artist for as long as he can remember and it seems his path is set, with a scholarship to RISD and his family's blessing to pursue the career he's always dreamed of. Still, contemplating a future without his best friend, Harry Wong, by his side makes Danny feel a panic he can barely put into words. Harry's and Danny's lives are deeply intertwined and as they approach the one-year anniversary of a tragedy that shook their friend group to its core, Danny can't stop asking himself if Harry is truly in love with his girlfriend, Regina Chan. When Danny digs deeper into his parents' past, he uncovers a secret that disturbs the foundations of his family history and the carefully constructed façade his parents have maintained begins to crumble. With everything he loves in danger of being stripped away, Danny must face the ghosts of the past in order to build a future that belongs to him.… (more)

LibraryThing member m.belljackson
This may well be your new favorite YA novel!

Gentle suspense builds with mysteries of Danny's dead sister, his father's lost job, Clay Ballard, leaving Texas, and Sandra. Readers also wonder
when Danny will finally get over his reticence in speaking and will find the confidence to get the answers he has searched for and to act on them.

Kelly Loy Gilbert's writing stays close to perfect until the intentional stupidity of the car accident.
This was way to much of a personality stretch and not needed in the plot. Danny had done enough shifty things already -
we don't want to turn against him. Also, vote counting for High School elections is usually either done in tandem or
with the votes exchanged to compare counts and eliminate cheating. This didn't feel authentic.
And, enough Shasta.

Walt Whitman would have loved Danny's father's Quantum Entanglement:
"For every atom belonging to me as good belongs to you!"

"...later I always tried to draw it and always gave up, because you could never capture the way it felt to be there."… (more)
9 more
LibraryThing member acargile
I listened to Picture Us in the Light from Audiobooksync's release. Otherwise, I probably never would have come across it. They paired it with Secret Soldiers: How the US Twenty-Third Special Troops Fooled the Nazis by Janeczko. These are both about secrets.

Picture Us in the Light seems like a story about one kid and his friends. Realistic fiction. Been there, done that. It slowly reveals more and more. On its basic level, Danny possesses great talent as an artist. His parents have a green card to work in the United States. His father works at the University and, as far as I can tell, a brilliant scientist. His mother takes care of some kids and has cleaned houses. They struggle with money and they struggle with living in the United States in certain ways. They want Danny to have an American future, but they are not "Americanized" and are of a different generation, so their relationships don't quite fit to make the perfect family puzzle picture. Danny often has little patience with his parents. When he finds a box and innocently asks about the contents, Danny discovers that there appear to be secrets that his parents failed to tell him. He begins a tepid investigation.

Danny's story mainly revolves around his best friend, Harry. Harry's father, a politician, expects great things from Harry or at least, it's implied by Harry. Harry cannot truly understand Danny's poorness, but he also doesn't care. He would give him anything. Harry is the person whom everyone likes. He runs for students council and always wins. He charm disarms parents, friends, & students. Harry dates Regina, another person in their group of friends. Danny wonders if they love each other, for he has feelings for Harry. Most of the novel is from Danny's point of view, so we only see the situations from his vantage point. He stays silent because he's also friends with Regina and has his own secrets. There's also an anniversary coming up that changed their lives. As members of the newspaper, they are working on an issue memorializing the event.

I want to tell Danny to do the opposite of whatever he thinks he should do. He makes a decision and it's almost always the wrong decision. Often he doesn't know all of the facts. He so often says the wrong thing to his parents and doesn't say something to his friends that they need to hear. His parents are perhaps the most interesting of the characters. They are so excited that Danny receives early acceptance into the most prestigious art school in the United States: Rhode Island School of Design (RISD). His father, however, loses his job and the budget gets very tight. They shield Danny from anything that seems negative. They don't tell him why his father lost his job. They also don't tell him about the meaning of the box's contents until there is no longer a choice. They like Harry and know that Danny has a lifelong friend with him. The secrets of what happened a year ago at school and his parents (and his own) pasts, slowly unravel and Danny has to stop being selfish and see beyond himself.

What takes this beyond just another realistic fiction novel about a kid. The secrets. I didn't know what to think as I was listening to the novel. As more and more was slowly revealed, I was pulled more into the story and loved the ending. I loved where Danny ended up as a person and how realistically lives changed and were shaped because of secrets. What would be different if everyone knew everything. I feel that his parents' story is one of tragedy. They sacrificed with the best of intentions yet were always victims. It's a novel about culture. It's a novel about friendship. It's a novel about self. It's a novel about how to treat others and the consequences of those secret choices. It's a novel about life. There is another first person voice that slowly reveals who it is, allowing the reader to see life from another point of view whose voice is important, adding to these same ideas. Family, choices, sacrifice--what are the consequences of our attempts at each of these? There's a sense of such loneliness in this story, yet a possibility of hope ends the novel. I liked it a lot.… (more)
LibraryThing member DKnight0918
Oh my goodness, what a page turner. I highly recommend reading it in one day if possible, at the very least read the last half in one day. Of course I had to split up my reading over a few days due to work and life. I really enjoyed this book. It took me on an emotional roller coaster. I am so glad I received a copy of this book. I look forward to reading more of her books. I will go and read Conviction soon, too. I can’t even imagine having to live in fear the way Danny’s family does. I was so glad he had a great support system with his friends. I got so worried towards the end that things would not be resolved but was happy with the ending. One thing that would make the book even more phenomenal would be the illustrations of Danny’s drawings.… (more)
LibraryThing member ainjel
WOW WHAT A BEAUTIFUL BOOK. I know I say that a lot, but this book truly deserves it. I have never, ever read a book like it. The characters are all amazingly real and super flawed-- there is no idealization and idolization here. The plot is unfamiliar and wonderful, and I recommend going in blind to this one. You might think you know what's going on, and you might be right... or it might be something more.

The ending was stunning, and one of my absolute favourites of any book ever. The conclusion felt so raw and heartfelt and complicated. If you're one of those people who likes closure, this might not be for you. Sure, there's some closure, but it felt more like a beginning that an end, which is wonderfully liberating.

All in all, this is a gem and I need everyone to be talking about how real and heartfelt this book is.… (more)
LibraryThing member grumpydan
Danny Cheng is a gifted artist and has been accepted to the Rhode Island School of Design. His parents are so proud of him. His parents who are Chinese immigrants have hidden a secret from him, and slowly he learns what it is. Will it destroy his family, his future, who knows?

It’s tough being a high school student and trying to live up to your parent’s expectations. Although slow at times, building up the story and developing the characters, this was a very good book. It not only deals with Danny, but his two best friends Regina and Harry (who are dating), and his parents. The characters are well defined and this story has substance. It deals with suicide, discovery, loss, the power of friendships and family, immigrants, anxiety, college and more.

It is one of those books, where when you put it down, you are like wow. You have to think about it afterwards to understand it all.… (more)
LibraryThing member LaMaestra72
Here is a complex story that explores diverse cultures among Asian Americans and their struggles with individual/cultural/national identity. It is great to see new literature delve into how Asian American teens deal with family, friendship, secrets/lies, sexuality, stress and suicide. It starts off strong, is sluggish for a while but leaves me wanting a sequel at the end. Go, Danny and Harry!… (more)
LibraryThing member SamMusher
There's a lot going on in this book, and yet it moves very slowly. It took a long time to get going for me. The prose bogs down in tell-don't-show descriptions of Danny's inner monologue, few of which felt necessary to get to know the character. I'm giving it four stars because it's original and complex and I'm still thinking about what it has to say about love and family and immigration. My guess is that the vast majority of 7th and 8th graders, and probably most high schoolers as well, will get bored before the payoffs start coming in the last third of the book. I'll keep it in my collection for a little while and see if it moves, but my guess is students will prefer Aristotle and Dante, or Eleanor and Park.

Darius the Great Is Not Okay by Adib Khorram
You Bring the Distant Near by Mitali Perkins
A Very Large Expanse of Sea by Tahereh Mafi
The Love and Lies of Rukhsana Ali by Sabina Khan
The Poet X by Elizabeth Acevedo
2 more
I Am Not Your Perfect Mexican Daughter by Erika L. Sánchez
The Gentleman's Guide to Vice and Virtue by Mackenzi Lee
Fewer