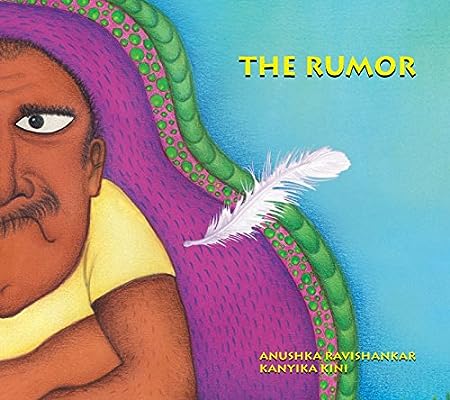 "Pandurang, the fruit-seller, is so dour that he can make milk turn sour. One day he coughs up a feather. As the story of Pandurang's feather is passed from one person to another, it grows and grows until it can hardly be recognized. And that's when the story weaves its magic on the ill-tempered Pandurang. An international verson of 'broken telephone,' The Rumor is a funny cautionary tale about the nature of rumors."--Provided by the publisher.

LibraryThing member KatieJewett
Ravishankar, A. (2012). The rumor. (Ill. By K. Kini). Toronto, ON: Tundra Books. 32 pp. ISBN: 978-1-77049-280-6. (Hardcover); $17.95.
The Rumor, is a story about the village of Baddbaddpur. The people in the story like to tell stories and spread rumors; it is like the game “telephone”. By the time the story gets back around, it is completely different than the original story. I enjoyed reading this book and I think the lesson is beneficial to children: don’t spread rumors or tell stories that are not true. I also loved the fact that Ravishankar used humor to get her message across. This book would be great for first and second grade children because it is a bit long and does have some advanced vocabulary. It is a better book to read aloud to your class rather than a silent, independent read. Although the colorful pictures fill up the entire pages, there are still many words on each page; therefore, not only does it tell a good story, but the pages will look appealing to young children. -Katie… (more)

Kamishibai Man by Allen Say
The Whole Story of Half a Girl by Veera Hiranandani
The Journey by Francesca Sanna
And Tango Makes Three by Justin Richardson
Hot, Hot Roti for Dada-ji by F. Zia
2 more
Oliver Button Is a Sissy by Tomie DePaola
The Arrival by Shaun Tan
Fewer