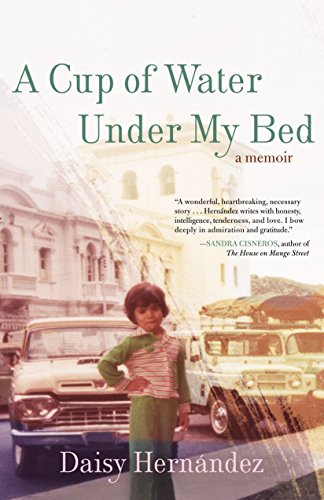 A Cup of Water Under My Bed: A Memoir

"It's 1980. Ronald Reagan has been elected president, John Lennon has been shot, and a little girl in New Jersey has been hauled off to English classes. Her teachers and parents and tias are expecting her to become white--like the Italians. This is the opening to A cup of water under my bed, the memoir of one Colombian-Cuban daughter's rebellions and negotiations with the women who raised her and the world that wanted to fit her into a cubbyhole. From language acquisition to coming out as bisexual to arriving as a reporting intern at the New York Times as the paper is rocked by its biggest plagiarism scandal, Daisy Hernandez chronicles what the women in her community taught her about race, sex, money, and love. This is a memoir about the private nexus of sexuality, immigration, race and class issues, but it is ultimately a daughter's cuento of how to take the lessons from home and shape them into a new, queer life"--… (more)

LibraryThing member SeriousGrace
In reading A Cup of Water Under My Bed I pictured Daisy Hernandez's childhood as a kind of tightrope dance. She learned to walk a straight and narrow line between varying beliefs and experiences concerning religion (Catholic versus Santeria), language (English versus Spanish), society (wealthy versus poverty), culture (American versus Cuban-Columbian), and even relationships (abuse versus love) and sex (straight, bisexual and lesbian). Navigating her coming of age through these conflicting influences, Hernandez emerges as compassionate and intelligent. She has the ability to articulate the difficulties of childhood (her father's alcoholism and abuse) as well as the innocence of childhood (stealing candies and eavesdropping on adult conversations). When she has to hide her sexuality from her aunt in order to have a relationship with her it breaks my heart. As it was they stopped speaking for seven years when her tia heard Hernandez has kissed a girl. Of course there is more to the story than this. Just go read it. Again.… (more)
8 more
LibraryThing member voracious
This is a wonderful memoir about a child trying to make sense of multiple cultures and her own emerging identity. Daisy's upbringing was far from ideal and full of confusing and contradictory concepts. Her Catholic, Columbian-born mother instilled a love of storytelling in Daisy while her abusive, alcoholic father relies on Santeria to improve their family's future. Daisy's family mixes Spanish and English frequently and she uses this Spanglish in her memoir to try to explain her upbringing and the intersection of cultures colliding in their lives. As Daisy grows up and comes out as a bisexual woman, her family's view of sexuality interferes in her relationships, particularly with an aunt who refuses to talk to her for seven years. I enjoyed the book more as Daisy grew up and able to leave her abusive father for college and a career in journalism. Her grit to pursue her destiny, while maintaining and learning more about her cultural roots through her research, was particularly interesting to me. In all, a well-written and fascinating cross-cultural, coming of age story.… (more)
LibraryThing member mootzymom
Amazing. This memoir is so beautifully written. By far the best book I've read all year.
LibraryThing member stephvin
This was a beautifully written book that presented a very honest picture of the difficulties of living in America as a Columbian/Cuban immigrant family. The author explains the religious and cultural ties of her immediate and extended family members and how she developed a love of reading and writing that formulated her career. Her sexual life was also explored in all honesty and written in language beautifully presented Very interesting and well written memoir.… (more)
LibraryThing member SiriJR
Hernández' memoir is a beautiful and lyrical exploration of the intersection of identity, family, and love, against the unforgiving background of systemic poverty and inequality. Hernández has an important voice and perspective, and is a strong writer, imbuing poetry into her every thought.
LibraryThing member mongoosenamedt
Hernández writes so well, delicate little prose gifts spread across this memoir set up as a series of tangential anecdotes subtly segued. I loved the bits of Spanish sprinkled throughout
LibraryThing member debbiesbooknook
My Takeaway

“Generally speaking, gay people come out of the closet, straight people walk around the closet, and bisexuals have to be told to look for the closet. We are too preoccupied with shifting.”
Daisy Hernández, A Cup of Water Under My Bed

A Cup of Water Under My Bed was chosen by my book club at work (lovingly named El Barrio Book Club). The memoir was heartfelt, witty, honest and full of sentiment. I truly enjoyed the vivid vignettes Hernández's provided throughout the book. I found myself reminiscing quite a lot. As a first-generation Dominican-American, I appreciate and cherish being part of two cultures. I love the United States and I love the Dominican Republic (DR) . . . However, my traditions are pretty much all Dominican (with a es-prinkle of American) because of my parents -- especially my mom. This woman did not play around and meant business! I was born in the US, but Spanish was my first language. Once I learned English, I was not allowed to speak it at home until I was around thirteen years old. Also, every year until the age of nine, I traveled to DR with my abuela (Mama). Some of my fondest childhood memories are from those amazing summer trips. Many of Hernández's anecdotes reminded me of my childhood. I too had to translate and interpret for family members (grandparents, aunts, uncles, neighbors, and my dad). Interestingly, my parents worked at a glass factory for many years until it closed. I appreciated Hernández's candid writing especially on common taboo subjects in Latino households. I thoroughly enjoyed this memoir and highly recommend it. Hernández gives readers a front row seat to her childhood and early experiences as a queer and feminist Latina.… (more)
LibraryThing member joyfiction
I can't exactly pinpoint what I liked about this book, only that I enjoyed it. Having read plenty of memoirs and/or autobiographies most of them become tedious after some time. But this one kept my attention with the way it was written and I could honestly say that I enjoyed this book.
LibraryThing member lilithcat
This has been sitting around for awhile; I'm sure glad I picked it up out of the "to be read" pile.

Although labeled a "memoir", it's really a collection of essays, most of which have been published elsewhere. As a result, Hernández' story is not told in a chronological way, but rather in themes. It works.

Her parents were both immigrants to New York, her father from Cuba, her mother from Colombia. So Hernández grew up in multiple cultures, and these essays describe how she navigated divides of language, class, gender, sexuality, and came to appreciate and admire her family even as she moved into a life very different from theirs, a transition so common to first-generation Americans.

She has a real ear for language, particularly descriptive language. Her contrasting descriptions of two santeras, for instance: "La Viejita María is a woman who looks like dried corn. Her face is a light yellow, the skin dry and wrinkled; her white hair like a husk, with silk threads pulled back and running wild around her head" annd "Yvette is a woman who looks like a church bell. Her copper body curves with purpose, angles on a chair as if from a tower overlooking a village by the sea." Language for her is music: "The women in my family insist that I translated in those years, that I was the song between Tía Dora and the nurse . . . danced from English to Spanish and Spanglish and back again, following the music of questions . . ."… (more)
Fewer