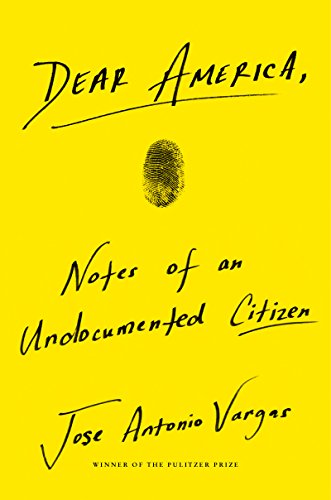 "The movement of people--what Americans call 'immigration' and the rest of the world calls 'migration'--is among the defining issues of our time. Technology and information crosses countries and continents at blistering speed. Corporations thrive on being multinational and polyglot. Yet the world's estimated 244 million total migrant population, particularly those deemed 'illegal' by countries and societies, are locked in a chaotic and circular debate about borders and documents, assimilation and identity. An issue about movement seems immovable: politically, culturally and personally. Dear America: Notes Of An Undocumented Citizen is an urgent, provocative and deeply personal account from Jose Antonio Vargas, a Pulitzer Prize-winning journalist who happens to be the most well-known undocumented immigrant in the United States. Born in the Philippines and brought to the U.S. illegally as a 12-year-old, Vargas hid in plain-sight for years, writing for some of the most prestigious news organizations in the country (The Washington Post, The New Yorker) while lying about where he came from and how he got here. After publicly admitting his undocumented status--risking his career and personal safety--Vargas has challenged the definition of what it means to be an American, and has advocated for the human rights of immigrants and migrants during the largest global movement of people in modern history. Both a letter to America and a window into Vargas's America, this book is a transformative argument about migration and citizenship, and an intimate, searing exploration on what it means to be home when the country you call your home doesn't consider you one of its own"--… (more)

LibraryThing member nmele
Disclosure: The author is a friend of my son.

This brief book is the personal story of a young Filipino boy brought to the U.S. by his family who discovers he is undocumented just after Congress passed the immigration legislation that made being in the U.S. without documents a crime. Vargas describes his personal journey to a career first in journalism and then in activism, his efforts to change his status and why they have not worked for him. It is a gutsy book that describes a different kind of undocumented immigrant--from Asia, not Mexico or Central America; brought here as a child who later finds out he has believed untruths about himself. Vargas makes clear why the immigration debate is important--human lives are at stake--and why it is so complex and difficult to resolve.… (more)
2 more
LibraryThing member SamSattler
I gave up on "Dear America" only after completing about seventy percent of the book. This may be the only book that I read that far through without finishing, so it's one that I'll remember, even if it's only for that reason. So why did I quit on it?

Going in, I figured it would offer a heartfelt defense of immigration into this country, especially of the illegal variety, a defense that would, based upon the author's personal experiences, be an understandably one-sided view. That would not - and did not- bother me at all. But I was hoping that if Vargas even bothered to mention that there was another point of view, that he would treat it and those who held it with at least a tiny bit of respect. Instead, Vargas tore into Trump, those who voted for him, and conservatives in general with a dismissive, bigoted, and cruel ferocity that caused me to lose all respect and patience both for him and his little book.

Sorry, Mr. Vargas. You had me convinced of your argument for over half the book - then you blew it with your petty attack on anyone who dares question your view of the issue. (And honestly, folks, the book is not particularly well written in the first place - it reads more like a Young Adult book than something meant for adults.)… (more)
LibraryThing member strandbooks
Notes of an Undocumented Citizen by Jose Antonio Vargas is a very powerful memoir. He’s my age so references many events from high school/college that I remember well...except for him it was the time he learned that his grandfather who had come here legally from the Philippines had doctored papers so Jose could make it here. He’s struggled in a limbo and self-doubt ever since. His story is also about the many people (teachers, friends parents, coworkers) to become a successful journalist despite his status. It’s a fast and powerful read that I highly recommend.… (more)
Fewer

When They Call You a Terrorist: A Black Lives Matter Memoir by Patrisse Khan-Cullors
So You Want to Talk About Race by Ijeoma Oluo
Picture Us In The Light by Kelly Loy Gilbert