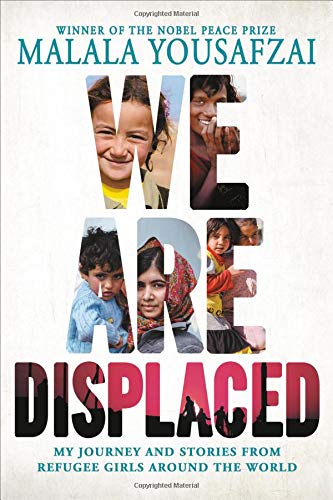 We Are Displaced: My Journey and Stories from Refugee Girls Around the World

"Malala Yousafzai introduces some of the people behind the statistics and news stories we read or hear every day about the millions of people displaced worldwide. Malala's experiences visiting refugee camps caused her to reconsider her own displacement-- first as an Internally Displaced Person when she was a young child in Pakistan, and then as an international activist who could travel anywhere in the world except to the home she loved. In We Are Displaced, which is part memoir, part communal storytelling, Malala not only explores her own story, but she also shares the personal stories of some of the incredible girls she has met on her journeys-- girls who have lost their community, relatives, and often the only world they've ever known. In a time of immigration crises, war, and border conflicts, We Are Displaced is an important reminder from one of the world's most prominent young activists that every single one of the 68.5 million currently displaced is a person-- often a young person-- with hopes and dreams."--Dust jacket flap.… (more)

Illegal by Eoin Colfer
A Land of Permanent Goodbyes by Atia Abawi
SHOUT by Laurie Halse Anderson
Stamped: Racism, Antiracism, and You: A Remix of the National Book Award-winning Stamped from the Beginning by Jason Reynolds
How Dare the Sun Rise: Memoirs of a War Child by Sandra Uwiringiyimana
4 more
The Lines We Cross by Randa Abdel-Fattah
Refugee by Alan Gratz
Proud (Young Readers Edition): Living My American Dream by Ibtihaj Muhammad
Escape from Aleppo by N. H. Senzai
Fewer