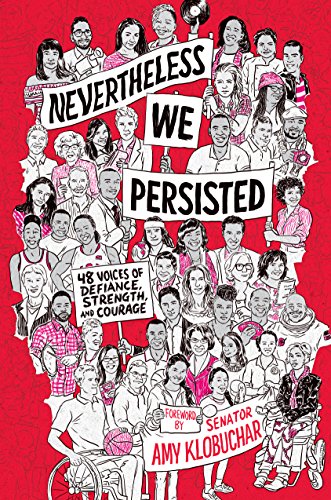 Nevertheless, We Persisted: 48 Voices of Defiance, Strength, and Courage

by In This Together Media (Editor)

A powerful collection of essays from actors, activists, athletes, politicians, musicians, writers, and teens, each writing about a time in their youth when they were held back because of their race, gender, or sexual identity-- but persisted. Among others: actress Alia Shawkat was told she was too "ethnic" for parts. Former NFL player Wade Davis bullied other gay classmates in an attempt to hide his own sexuality. Holocaust survivor Fanny Starr tells of her harrowing time in Auschwitz, where she watched her family disappear, one by one. They tell how they rose through the hate, overcoming the obstacles of their childhood to the hard-won lives they live today.

We Rise, We Resist, We Raise Our Voices by Wade Hudson
Harbor Me by Jacqueline Woodson
We Are Displaced: My Journey and Stories from Refugee Girls Around the World by Malala Yousafzai
Stonewall: A Building. An Uprising. A Revolution by Rob Sanders
An Indigenous Peoples' History of the United States for Young People (ReVisioning American History for Young People) by Roxanne Dunbar-Ortiz
12 more
My Family Divided: One Girl's Journey of Home, Loss, and Hope by Diane Guerrero
Raising White Kids: Bringing Up Children in a Racially Unjust America by Jennifer Harvey
A Very Large Expanse of Sea by Tahereh Mafi
Pet by Akwaeke Emezi
March: Book Two by John Lewis
Illegal by Eoin Colfer
Darius the Great Is Not Okay by Adib Khorram
Ghost Boys by Jewell Parker Rhodes
Antiracist Baby by Ibram X. Kendi
When Aidan Became a Brother by Kyle Lukoff
It's Trevor Noah: Born a Crime: Stories from a South African Childhood (Adapted for Young Readers) by Trevor Noah
Ghost (Track) by Jason Reynolds
Fewer