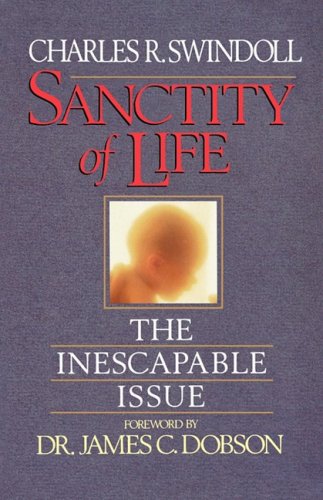 Sanctity of Life: The Inescapable Issue

Here's straight talk you wouldn't have heard from the pulpit 50 years ago. Even five years ago. In fact, it is the first time this well known pastor speaks out on the inescapable issue of our day: abortion. While Sanctity of Life decries society's penchant for abortion on demand, the book is more than just another call for legislative action. Instead, Chuck Swindoll wants his words to help Christians "get their arms around" the nation's most divisive issue, reach out to women and their families who are enduring the aftermath of a bad decision, and then move beyond the tension of the issue to join in a plea for lifetime morality. Chuck Swindoll believes that the 1990s is not the time for Christians to slacken their efforts either in opposing abortion or in advocating moral purity. Now is the moment for renewed vigor in social action and, above all, godly living. Sanctity of Life is a book on resolve, courage, and compassion. It is not the last word on abortion, but it is the definitive position on moral living for Christians today.… (more)