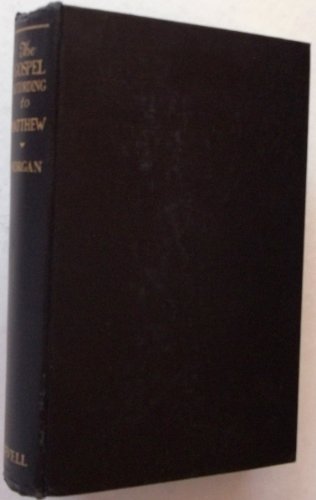 The Gospel According to Matthew

This volume, based on seventy-three sermons that consecutively cover Matthew's Gospel, receives strength through the very roughness and directness of the word spoken under the inspiration of vast, visible audiences while addressed to the impressionable hearts of men. From first to last, the various units in the exposition proceed on the assumption that it was the intention of the writer to set forth the Person of our Lord in relation to His kingly office. So from the mystic account of His advent in human history, through the record of the authority of His ethical enunciation, the mercifulness of His method, the majesty of His death, and the glory of His resurrection, to the ringing claim of ""all authority,"" and the clarion command to ""disciple the nations,"" we are ever in the presence of the King. In an enthusiastic review, the Sunday School Times observes, ""It will prove a mine of treasure for teaching the Sunday- school lessons. There is hardly a page from which some expression of great force does not strike out at the reader."" G. Campbell Morgan (1863-1945) was a leading Bible expositor in England and the United States. Despite a lack of substantial formal training, Morgan was a prolific writer and teacher. Ordained into the Congregational ministry, he was the pastor of Westminster Chapel, London (1904-17 and 1933-45). Morgan also conducted two very successful teaching tours in the United States, including work with D.L. Moody's ministry.… (more)