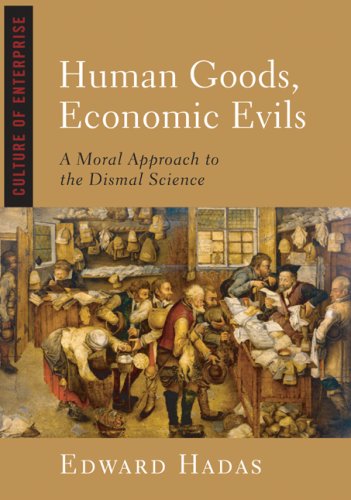 Much of modern economic theory is based on a rather unflattering view of human nature, one that is essentially selfish and materialistic. Not surprisingly, this incomplete version of human anthropology makes for some rather incomplete economic theory, argues Edward Hadas in Human Goods & Economic Evils. Instead of simply being utility maximizers, Hadas argues human beings also seek to maximize morality in their everyday economic lives. For Hadas, economic man is moral man, who always strives for the good according to his nature. While the weakness of human nature ensures that the good is never fully achieved, economic activity is nevertheless best understood as part of the great moral enterprise of humanity.   Human Goods & Economic Evils does not claim that the basic economic activities of laboring and consuming are the most important things in life, but they are literally vital, and as such deserve to be studied and understood through a more morally sympathetic view of human nature. With this in mind, Human Goods & Economic Evils provides both lay readers and policymakers the intellectual tools necessary to judge what is right and what is wrong about the modern economy, and returns the study of economics to its proper, more humanistic sphere.  … (more)

Redeeming Economics: Rediscovering the Missing Element by John D. Mueller
A Humane Economy: The Social Framework of the Free Market by Wilhelm Röpke
The Commercial Society: Foundations and Challenges in a Global Age by Samuel Gregg
Toward a Truly Free Market: A Distributist Perspective on the Role of Government, Taxes, Health Care, Deficits, and More by John C. Medaille
The Capitalist Revolution: Fifty Propositions About Prosperity, Equality, and Liberty by Peter L. Berger
13 more
Index to the Works of Adam Smith (Glasgow Edition of the Works and Correspondence of Adam Smith) by Adam Smith
A Student's Guide to Economics by Paul Heyne
On Adam Smith's "Wealth of Nations": A Philosophical Companion by Samuel Fleischacker
Moral Markets: The Critical Role of Values in the Economy by Paul J. Zak
Free to Choose: A Personal Statement by Milton Friedman
The Soulful Science: What Economists Really Do and Why It Matters by Diane Coyle
Wilhelm Ropke by John Zmirak
Business as a Calling: Work and the Examined Life by Michael Novak
On Moral Business: Classical and Contemporary Resources for Ethics in Economic Life by Max L. Stackhouse
The Spirit of Democratic Capitalism by Michael Novak
Economics of Good and Evil: The Quest for Economic Meaning from Gilgamesh to Wall Street by Tomáš Sedláček
Why Some Things Should Not Be for Sale: The Moral Limits of Markets by Debra Satz
Correspondence of Adam Smith (Glasgow Edition of the Works and Correspondence of Adam Smith) by Adam Smith
Fewer