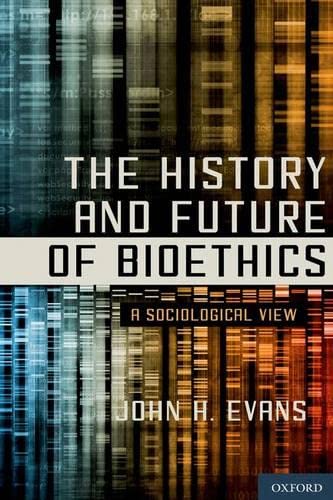 The History and Future of Bioethics: A Sociological View

It seems like every day society faces a new ethical challenge raised by a scientific innovation. Human genetic engineering, stem cell research, face transplantation, synthetic biology - all were science fiction only a few decades ago, but now are all reality. How do we as a society decidewhether these technologies are ethical? For decades professional bioethicists have served as mediators between a busy public and its decision-makers, helping people understand their own ethical concerns, framing arguments, discrediting illogical claims, and supporting promising ones. Thesebioethicists play an instrumental role in guiding governments' ethical policy decisions, consulting for hospitals faced with vital decisions, and advising institutions that conduct research on humans.Although the bioethics profession has functioned effectively for many years, it is now in crisis. Policy-makers are less inclined to take the advice of bioethics professionals, with many observers saying that bioethics debates have simply become partisan politics with dueling democratic andrepublican bioethicists. While this crisis is contained to the task of recommending ethical policy to the government, there is risk that it will spread to the other tasks conducted by bioethicists.To understand how this crisis came about and to arrive at a solution, John H. Evans closely examines the history of the bioethics profession. Bioethics debates were originally dominated by theologians, but came to be dominated by the emerging bioethics profession due to the subtle and slowinvolvement of the government as the primary consumer of bioethical arguments. After the 1980s, however, the views of the government changed, making bioethical arguments less legitimate. Exploring the sociological processes that lead to the evolution of bioethics to where it is today, Evans proposesa radical solution to the crisis. Bioethicists must give up its inessential functions, change the way they make ethical arguments, and make conscious and explicit steps toward re-establishing the profession's legitimacy as a mediator between the public and government decision-makers.… (more)