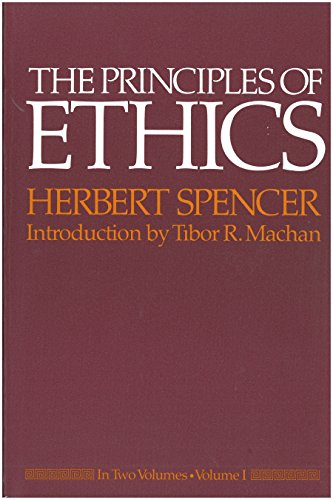 The Principles of Ethics: In Two Volumes

Though almost forgotten today, Herbert Spencer ranks as one of the foremost individualist philosophers. His influence in the latter half of the nineteenth century was immense. Spencer's name is usually linked with Darwin's, for it was he who penned the phrase: survival of the fittest. Today in America he is most often admired for his trenchant essays in 'The Man Versus the State'. But Spencer himself considered THE PRINCIPLES OF ETHICS to be his finest work. In the second volume, under 'Justice', is his final statement on the role of the state. His formula for justice is summed up in these words: "Every man is free to do that which he wills, provided he infringes not the equal freedom of any other man."

Social Contract, Free Ride by Anthony De Jasay
The Politicization of Society by Kenneth S. Jr. Templeton
Justice and Its Surroundings by Anthony De Jasay
The Morals of Markets and Related Essays by H. B. Acton
Freedom and Federalism by Felix Morley
13 more
Essays on the Principles of Morality and Natural Religion by Henry Home
The State by Anthony De Jasay
The Liberal Mind by Kenneth Minogue
The Logic of Liberty by Michael Polanyi
Lectures on Jurisprudence. Edited by R.L. Meek, D.D. Raphael and P.G. Stein. [The Glasgow Edition]. Liberty Fund. 1978. by Adam Smith
Lectures on Rhetoric and Belles Lettres (The Glasgow Edition of the Works and Correspondence of Adam Smith, Vol. 4) by Adam Smith
An Essay on the Nature and Conduct of the Passions and Affections by Francis Hutcheson
Philosophiae Moralis Institutio Compendiaria, with A Short Introduction to Moral Philosophy by Francis Hutcheson
The Man and the Statesman: The Correspondence and Articles on Politics (The Collected Works of Frederic Bastiat) by Frédéric Bastiat
The Principles of Moral and Political Philosophy by William Paley
Essays on Philosophical Subjects (Glasgow Edition of the Works and Correspondence of Adam Smith) by Adam Smith
Can Capitalism Survive? by Benjamin A. Rogge
The Voice of Liberal Learning by Michael Oakeshott
Fewer