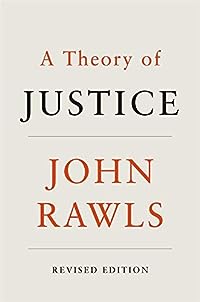 A Theory of Justice

This volume is a widely-read book of political philosophy and ethics. Arguing for a principled reconciliation of liberty and equality, it attempts to solve the problem of distributive justice (this concerns what is considered to be socially just with respect to the allocation of goods in a society). The resultant theory is known as "Justice as Fairness", from which the author derives his two famous principles of justice. The first of these two principles is known as the equal liberty principle. The second principle is split into two parts; the first, known as fair equality of opportunity, asserts that justice should not benefit those with advantageous social contingencies; while the second, reflecting the idea that inequality is only justified if it is to the advantage of those who are less well-off, is known as the difference principle.… (more)

Theories of Rights by Jeremy Waldron
A Treatise of Human Nature by David Hume
Hobbes: Leviathan: Revised student edition (Cambridge Texts in the History of Political Thought) by Thomas Hobbes
After Virtue: A Study in Moral Theory, Third Edition by Alasdair MacIntyre