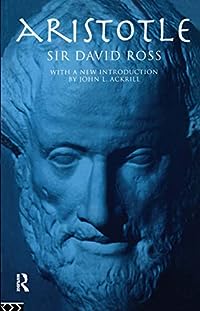 Sir David Ross was one of the most distinguished and influential Aristotelians of this century; his study has long been established as an authoritative survey of the life, work and philosophy of Aristotle. This clear and lucid account contains useful summaries of theories and arguments, with brief, suggestive critical comments. Aristotle's work encompassed all the branches of science and learning which were central to the intellectual life of the ancient world: logic, the philosophy of nature, biology, psychology, metaphysics, ethics, politics, rhetoric and poetics. Aristotle's borrowings from his predecessors, and his own fundamental influence on later philosophy, are also examined. Important Greek terms in Aristotle's work are explained and discussed. Aristotle is now re-issued with a new introduction by John L. Ackrill, which reviews developments in Aristotelian studies since Sir David Ross originally wrote his classic study. The bibliography has been supplemented by references to recent works. Both students of philosophy and general rea ders will find the volume an indispensable guide to Aristotle's thought.… (more)

Aristotle: The Desire to Understand by Jonathan Lear