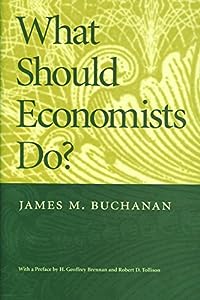 What Should Economists Do?

This volume is a collection of sixteen essays on three general topics: the methodology of economics, the applicability of economic reasoning to political science and other social sciences, and the relevance of economics as moral philosophy. Several essays are published here for the first time, including: Professor Alchian on Economic Method; Natural and Artifactual Man, and; Public Choice and Ideology. This book provides relatively easy access to a wide range of work by a moral and legal philosopher, a welfare economist who has consistently defended the primacy of the contractarian ethic, a public finance theorist, and a founder of the burgeoning subdiscipline of public choice. Buchanan's work has spawned a methodological revolution in the way economists and other scholars think about government and government activity. As a measure of recognition for his significant contribution, Dr Buchanan was awarded the 1986 Nobel Prize in Economics.… (more)