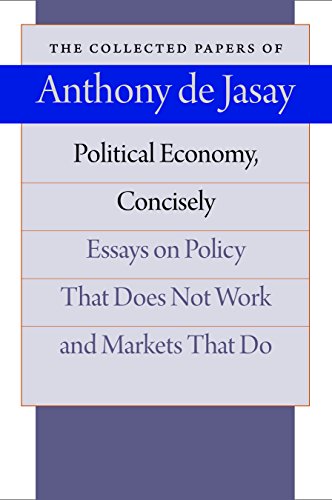 Political Economy, Concisely: Essays on Policy That Does Not Work and Markets That Do

Anthony de Jasay is arguably one of the most independent thinkers and influential libertarian political philosophers of our time. Jasay challenges the reigning paradigms justifying modern democratic government, critiquing what he regards as the well-intentioned but illinformed arguments favoring the modern expansion of state power. The seventy-one articles collected in Political Economy, Concisely are exactly what the title promises: a collection of concise essays that examine the political economy of a free society. Written for the general reader and specialist alike, these essays articulate a convincing classical liberal view of the world, with a no-nonsense approach to modern economic theory. Many of the articles are collected here for the first time in book form. Jasay’s aim here is to clarify basic concepts in the realm of political and economic philosophy, such as property, equality and distributive justice, public goods, unemployment, opportunity costs, and welfare. His trenchant comments on European economics and political systems provide specifics that support his more general observations of the modern world. Arranged topically, these essays reflect the wit and intellectual elegance of their author, challenging conventional wisdom in a subtle yet incisive manner. Russian and French tragicomedies are used as striking illustrations of the fact that the human mind seems to be characteristically unwilling to endorse economic common sense against the myth of the beneficial effects of government control. Such lively topics as "How to Get a Free Lunch: Just Apply for It,” "Your Dog Owns Your House,” "Russia Hobbling Along on Clay Feet,” "Who Minds the Gap?” and "Free Riding on the Euro” both entertain and instruct. The topical arrangement within the sequence of the seven parts of the text provides a meaningful context for the reader and allows information to be accessed in a comprehensible manner. Political Economy, Concisely gives a jargon-free economic account of important matters in our daily lives. Its emphasis on the political rather than the ordinary business of life fills the need for revitalizing classical political economy, concisely. Anthony de Jasay is an independent theorist living in France. Jasay "believes that philosophy should be mainly, if not exclusively, about clarifying conclusions that arise from the careless use of, or deliberate misuse of, language. There are echoes here of  . . . Wittgenstein's later philosophy.” His books, translated into a half dozen languages, include Justice and Its Surroundings and Social Contract, Free Ride.[source/credit line] I. M. D. Little in Ordered Anarchy, 2007Hartmut Kliemt is Professor of Philosophy and Economics at the Frankfurt School of Finance and Management.… (more)