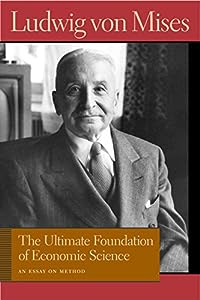 The Ultimate Foundation of Economic Science: An Essay on Method

In this volume, Mises argued that economics is a science because human action is a natural order of life and that it is the actions of humans that determine markets and capital decisions. Since Mises believed these links could be proven scientifically, he concluded that economics, with its basis on that human action, is indeed a science in its own right and not an ideology or a metaphysical doctrine. Ludwig von Mises (1881-1973) was the leading spokesman of the Austrian School of economics throughout most of the twentieth century. Bettina Bien Greaves is a former resident scholar and trustee of the Foundation for Economic Education and was a senior staff member at FEE from 1951 to 1999.