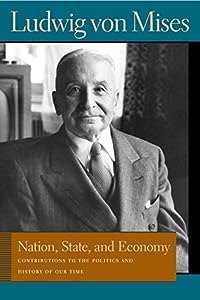 Nation, State, and Economy: Contributions to the Politics and History of Our Time

Essential to Mises's concept of a classical liberal economy is the absence of interference by the state. In World War I, Germany and its allies were overpowered by the Allied Powers in population, economic production, and military might, and its defeat was inevitable. Mises believed that Germany should not seek revenge for the peace of Versailles; rather it should adopt liberal ideas and a free-market economy by expanding the international division of labor, which would help all parties. "For us and for humanity," Mises wrote, "there is only one salvation: return to rationalistic liberalism." Ludwig von Mises (1881-1973) was the leading spokesman of the Austrian School of economics throughout most of the twentieth century. Bettina Bien Greaves is a former resident scholar and trustee of the Foundation for Economic Education and was a senior staff member at FEE from 1951 to 1999.… (more)