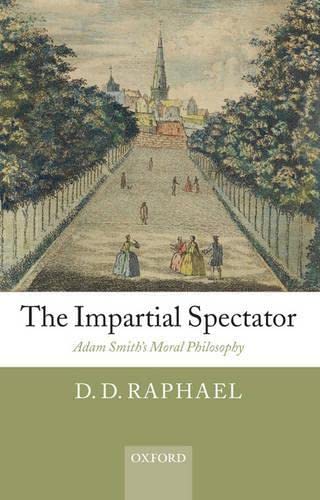 D. D. Raphael provides a critical account of the moral philosophy of Adam Smith, presented in his first book, The Theory of Moral Sentiments. Whilst it does not have the same prominence in its field as his work on economics, The Wealth of Nations, Smith's writing on ethics is of continuingimportance and interest today, especially for its theory of conscience. Smith sees the origin of conscience in the sympathetic and antipathetic feelings of spectators. As spectators of the actions of other people, we can imagine how we would feel in their situation. If we would share their motives,we approve of their action. If not, we disapprove. When we ourselves take an action, we know from experience what spectators would feel, approval or disapproval. That knowledge forms conscience, an imagined impartial spectator who tells us whether an action is right or wrong. In describing thecontent of moral judgement, Smith is much influenced by Stoic ethics, with an emphasis on self-command, but he voices criticism as well as praise. His own position is a combination of Stoic and Christian values.There is a substantial difference between the first five editions of the Moral Sentiments and the sixth. Failure to take account of this has led some commentators to mistaken views about the supposed youthful idealism of the Moral Sentiments as contrasted with the mature realism of The Wealth ofNations. A further source of error has been the supposition that Smith treats sympathy as the motive of moral action, as contrasted with the supposedly universal motive of self-interest in The Wealth of Nations.… (more)

The Theory of Moral Sentiments (Glasgow Edition of the Works and Correspondence of Adam Smith, vol.1) by Adam Smith
Economics of Good and Evil: The Quest for Economic Meaning from Gilgamesh to Wall Street by Tomáš Sedláček
An Inquiry Into The Nature And Causes Of The Wealth Of Nations (Two Volume Set) by Adam Smith
After Virtue: A Study in Moral Theory, Third Edition by Alasdair MacIntyre