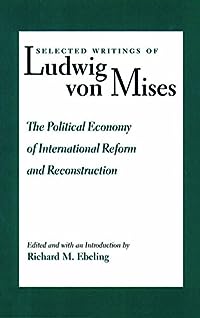 When he fled Austria in 1934, Ludwig von Mises left behind a wealth of writings that, he supposed, were lost forever. Seized by the Nazi Gestapo, the papers were subsequently captured by the Soviet KGB and were archived in Moscow. Their discovery in 1996, by Professors Richard and Anna Ebeling of Hillsdale College, received widespread attention. In cooperation with Hillsdale College, Liberty Fund will make available these long-lost writings, many of which have not previously appeared in English, as part of a three-volume edition of selected writings by one of the unsurpassed economists of the twentieth century. In the first of the volumes to be published are contained separate previously unpublished works that Mises wrote from 1940 through 1944, when much of the world was at war. The papers include "Guiding Principles for the Reconstruction of Austria” (1940); "An Eastern Democratic Union: A Proposal for the Establishment of a Durable Peace in Eastern Europe” (1943); "Aspects of American Foreign Trade Policy” (1943); "Mexico’s Economic Problems” (1943); "The Main Issues in Present-Day Monetary Controversies” (1944); and, "A Non-Inflationary Proposal for Post-War Monetary Reconstruction” (1944). Richard Ebeling is Professor of Economics at Northwood University. He has served as the editor or co-editor for twenty other books, including The Age of Economists: From Adam Smith to Milton Friedman and Human Action: a 50-Year Tribute.… (more)