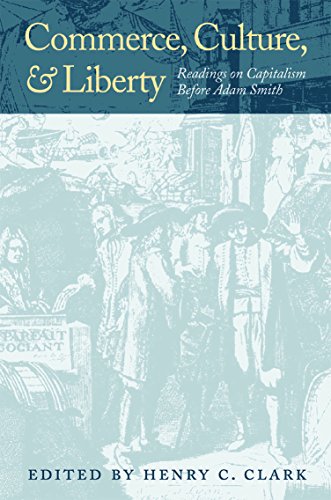 Commerce, Culture, and Liberty: Readings on Capitalism Before Adam Smith

This collection of thirty-seven readings (from thirty-three writers) brings together some of the most significant pre#150;Adam Smith writings on the political and cultural dimensions of capitalism. To modern readers, these seventeenth- and eighteenth-century discussions of commerce and economic life in general are surprising because they are so closely integrated to moral and cultural issues. Though we may have forgotten how extensively such issues were once discussed, it is uncanny what a contemporary ring many of these issues have. Part of the value of this book is in reminding us that many of our own concerns are not without precedent and earlier reflection. The selections come both from now-unfamiliar authors who were influential in their own time, as well as from such well-known writers as Rousseau, Defoe, Fielding, Montesquieu, and Voltaire. The essays emphasize the human meaning of the market; they were selected to provide a sense of the range of opinion that prevailed on the broader significance of the market economy before it became a pervasive feature of modern life. Commerce, Culture, and Liberty presents rich and provocative writings on the relationship between commerce and luxury, virtue, nobility, agriculture, the state, religion, civility, and liberty. The book restores the voice of a rich body of reflections on the larger import of the birth of the modern economy that has been largely silent in academic discourse on the topic. Moreover, it presents significant though hard-to-find writings by a host of well-known authors, including a little-known essay by Rousseau. It also presents important writings that have been preempted by Adam Smith, writings that say as much about our age as about the age in which they were written. Henry C. Clark is Visiting Professor in the Clemson Institute for the Study of Capitalism at Clemson University. He has published two books and several articles, mainly on the French and Scottish Enlightenments.… (more)