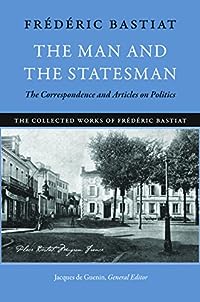 The Man and the Statesman: The Correspondence and Articles on Politics (The Collected Works of Frederic Bastiat)

The Man and the Statesman, the first volume in Liberty Fund's six-volume series, may be considered the most complete edition of Bastiat's works published to date, in any country, and in any language. The main source for this translation is the seven-volume OEuvres complètes de Frédéric Bastiat, published in the 1850s and 1860s. The present volume, most of which has never before been translated into English, includes Bastiat's complete correspondence: 207 letters Bastiat wrote between 1819, when he was only 18 years old, until just a few days before his untimely death in 1850 at the age of 49. For contemporary classical liberals, Bastiat's correspondence will provide a unique window into a long-forgotten world where opposition to war and colonialism went hand-in-hand with support for free trade and deregulation. Frédéric Bastiat (1801-1850) was one of the leading advocates of free markets and free trade in the mid-nineteenth century. Jacques de Guenin is founder of the Cercle Frédéric Bastiat. He is a graduate of the École des Mines in Paris and holds a Master of Sciences from the University of California, Berkeley. Dennis O'Keeffe is Professor of Social Science at the University of Buckingham, Buckingham, England, and is Senior Research Fellow in Education at the Institute of Economic Affairs, London. David M. Hart has a Ph.D. in history from King's College, Cambridge, and is the Director of Liberty Fund's Online Library of Liberty.… (more)