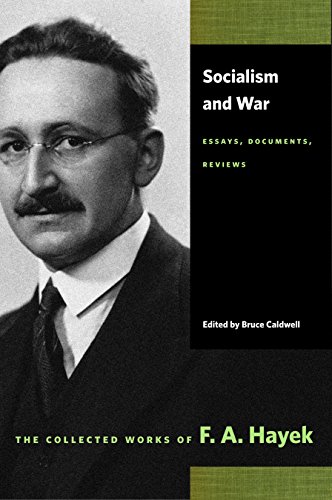 Throughout the twentieth century socialism and war were intimately connected. The unprecedented upheavals wrought by the two world wars and the Great Depression provided both opportunity and impetus for a variety of socialist experiments. This volume in The Collected Works of F. A. Hayek documents the evolution of Hayek's thought on socialism and war during the dark decades of the 1930s and 1940s. Opening with Hayek's arguments against market socialism, the volume continues with his writings on the economics of war, many in response to the proposals made in John Maynard Keynes's famous pamphlet, How to Pay for the War. The last section presents articles that anticipated The Road to Serfdom, Hayek's classic meditation on the dangers of collectivism. An appendix contains a number of topical book reviews written by Hayek during this crucial period, and a masterful introduction by the volume editor, Bruce Caldwell, sets Hayek's work in context. Socialism and War will interest not just fans of The Road to Serfdom, but anyone concerned with the ongoing debates over the propriety of government intervention in the economy. "When he wrote The Road to Serfdom, [Hayek's] was a voice in the wilderness. Now the fight [has] been taken up by people all over the world, by institutions and movements, and the ideas that seemed so strange to many in 1944 can be found from scholarly journals to television programs."--Thomas Sowell, Forbes "Intellectually [Hayek] towers like a giant oak in a forest of saplings."--Chicago Tribune "Each new addition to The Collected Works of F. A. Hayek, the University of Chicago's painstaking series of reissues and collections, is a gem."--Liberty on Volume IX of The Collected Works of F. A. Hayek… (more)