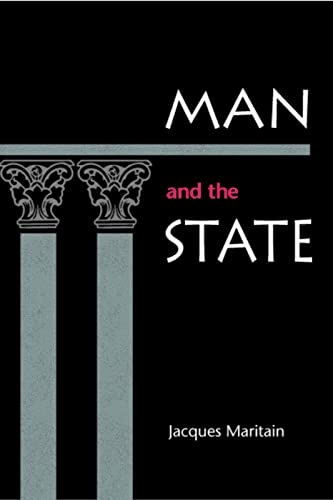 Man and the State

"Of time-transcending value, this book is probably the most succinct and clearest statement of Thomistic political theory available to the English-language reader. Written during his exile from war-torn Europe, Man and the State is the fruit of Maritain's considerable learning as well as his reflections on his positive American experience and on the failure of regimes he closely encountered on the Continent."--Jude P. Dougherty, The Catholic University of America "The lectures that were the basis for Man and the State were delivered at the University of Chicago at a time when Maritain was still in the first enthusiasm of his participation in the 1948 Universal Declaration of Human Rights. He devotes particular attention to the concept of rights, since, historically, rights theories were fashioned to supplant the natural law theory to which Maritain as a Thomist gives his allegiance. Maritain provides an ingenious and profound theory as to how natural law and natural rights can be complementary. For this reason alone it remains a fundamental contribution to political philosophy, but it is filled with other gems as well. Was Maritain too optimistic in his appraisal of modernity? Or have we unjustly lost the optimism that was his? Man and the State is an invitation to rethink the way we pose the basic questions of political philosophy."--Ralph McInerny, Jacques Maritain Center, University of Notre Dame ABOUT THE AUTHOR Jacques Maritain (1882-1973), distinguished French Catholic philosopher and writer, was the author of more than fifty books. A preeminent interpreter of the thought of Thomas Aquinas, Maritain was a professor of philosophy at the Institut Catholique de Paris, Columbia University, and Princeton University. He served as French Ambassador to the Vatican from 1945 to 1948. CONTENTS 1. The People and the State 2. The Concept of Sovereignty 3. The Problem of Means 4. The Rights of Man 5. The Democratic Charter 6. Church and State 7. The Problem of World Government… (more)

The Person and the Common Good by Jacques Maritain
The Servile State by Hilaire Belloc
Leisure: The Basis of Culture by Josef Pieper
The Spirit of Mediaeval Philosophy by Etienne Gilson
The Idea of A University by John Henry Cardinal Newman