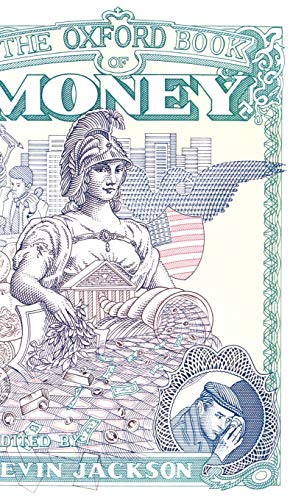 The Oxford Book of Money

Money. Rhino. The long green. It is "the most important thing in the world" (George Bernard Shaw). It is "power, freedom, a cushion, the root of all evil, the sum of blessings" (Carl Sandburg). It is "the alienated essence of man's work and existence" (Karl Marx). It is a medium of exchange, a measure of value, a standard of deferred payment. It is "better than poverty, if only for financial reasons" (Woody Allen). It is "the final enemy that will never be subdued" (Samuel Butler). Few things occupy as central a place in our lives as money, and few provoke such intense and varied response. Now in an entertaining and also thought-provoking book, Kevin Jackson brings together reflections on money by some of the most brilliant minds who ever lived, drawing on such writers as Dante and Chaucer, Shakespeare and Milton, Dostoevsky and Dickens, Mark Twain and Jane Austen, Edith Wharton and Henry James, and such thinkers as Max Weber, Thorstein Veblen, Adam Smith, Karl Marx, and John Maynard Keynes. Here is an all-encompassing look at the bottom line of human life - wealth and poverty, lending and borrowing, money heavens and money hells. There are colorful scenes from fiction - Silas Marner alone at night bathing his hands in gold and silver, Captain Ahab nailing a doubloon to the Pequot's mast, three rioters in Chaucer's "The Pardoner's Tale" finding death in a sack of coins. We find Polonius's advice "neither a borrower nor a lender be" side by side with Panurge's comic paeon to debt ("a thing most precious and dainty, of great use and antiquity") and Charles Lamb's memorable portrait of the debtor ("What a careless, even deportment hath your borrower! What rosy gills! What a beautiful reliance on Providence doth he manifest"). There are telling portraits of the money binge of the 1980s, in excerpts from Michael Lewis's Liar's Poker and Tom Wolfe's Bonfire of the Vanities, and harrowing descriptions of the Great Crash of 1929 and the German hyperinflation of the early 1920s, where at one point a dollar was worth a trillion marks. And perhaps most important, there are many thoughtful observations on money, such as Adam Smith's comment that "with the greater part of rich people, the chief enjoyment of riches consists in the parade of riches." Or Roger Scruton's point that, without money, transactions are limited to barter and gifts, but with it "exchange multiplies quietly and peacefully to infinity." Or Alexander Pope's caustic remark that "we may see the small value God has for riches, by the people he gives them to." By looking at money from so many different perspectives, through the eyes of writers and poets, philosophers and economists, financiers and politicians, The Oxford Book of Money offers us a deeper appreciation of what money is, what it can do, what it is really worth. By turns insightful, amusing, and intriguing, it will help readers to reexamine what money means to them and rethink its value in their lives.… (more)

The Life of Adam Smith by Ian Simpson Ross
On Moral Business: Classical and Contemporary Resources for Ethics in Economic Life by Max L. Stackhouse
In Praise of Commercial Culture by Tyler Cowen
Students Guide To Philosophy by Ralph M. McInerny
Money Mischief: Episodes in Monetary History by Milton Friedman
5 more
Frozen Desire: The Meaning of Money by Mark Buchan
A Student's Guide to Economics by Paul Heyne
The Person and the Common Good by Jacques Maritain
Inside American Education: The Decline, the Deception, the Dogmas by Thomas Sowell
Bonfire of the Humanities: Rescuing the Classics in an Impoverished Age by Victor Davis Hanson
Fewer