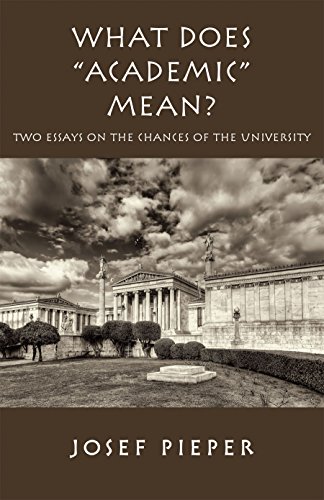 What Does "Academic" Mean?: Two Essays on the Chances of the University Today

Philosophy, Liberal Education and the University

"What Does "Academic" Mean? focuses, in two essays, on the prospects of contemporary universities. The term "academic" is traced back to Plato's Academy in a grove in Athens. The Academy is isolated, far away from the hustle and bustle of the city. Western universities founded in the Middle Ages show continuity, via Byzantium, with Plato's Academy. Not surprisingly, the Oxford Dictionary quoted by Pieper defines "academic" as "Not leading to a decision; unpractical." The preoccupation of the academic as academic is seen by Pieper to be fundamentally theoretical, not practical. Pure theory is that which cannot at all be pressed into service. Clearly, many university disciplines that are richly funded by industry and business concerns tend to be favored by university administrations, which, intent on financial survival, frown on "unproductive" disciplines such as pure philosophy: metaphysics being a case in point, since it is the discipline least capable of practical application"--… (more)