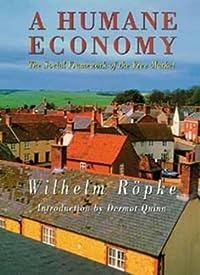 A Humane Economy: The Social Framework of the Free Market

"A Humane Economy is like a seminar on integral freedom conducted by a professor of uncommon brilliance." --Wall Street Journal "If any person in our contemporary world is entitled to a hearing it is Wilhelm Röpke." --New York Times A Humane Economy offers one of the most accessible and compelling explanations of how economies operate ever written. The masterwork of the great twentieth-century economist Wilhelm Röpke, this book presents a sweeping, brilliant exposition of market mechanics and moral philosophy. Röpke cuts through the jargon and statistics that make most economic writing so obscure and confusing. Over and over, the great Swiss economist stresses one simple point: you cannot separate economic principles from human behavior. Röpke's observations are as relevant today as when they were first set forth a half century ago. He clearly demonstrates how those societies that have embraced free-market principles have achieved phenomenal economic success--and how those that cling to theories of economic centralization endure stagnation and persistent poverty. A Humane Economy shows how economic processes and government policies influence our behavior and choices--to the betterment or detriment of life in those vital and highly fragile human structures we call communities.  "It is the precept of ethical and humane behavior, no less than of political wisdom," Röpke reminds us, "to adapt economic policy to man, not man to economic policy."  … (more)