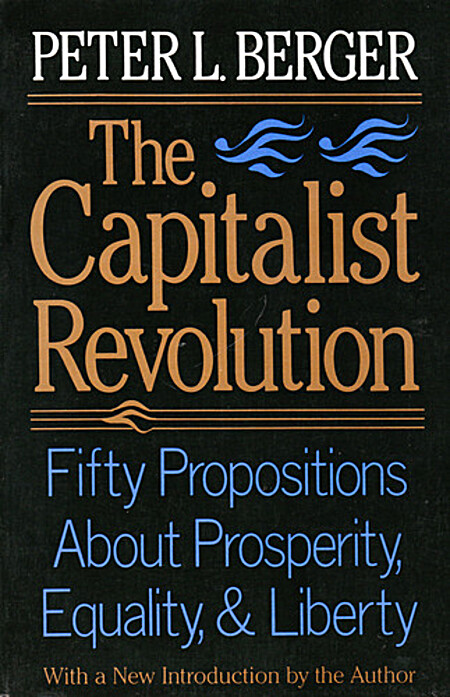 The Capitalist Revolution: Fifty Propositions About Prosperity, Equality, and Liberty

Up to now, only Marxists have attempted the comprehensive social, as distinct from purely economic, analysis that capitalism demands. To help fill that gap Peter Berger provides a provocative analysis of how capitalism, as the great engine of change, has revolutionized modern life. Berger examines capitalism empirically, as it operates in the real world, not as its detractors or defenders would wish it to be. Analyzing the advanced socialist societies he shows that inequality is an issue not of capitalism versus socialism but of modernization. He thus lays the basis for a powerful - and testable - new theory of capitalism and the 'economic culture' it creates. Written with wit and elegance, the book is punctuated with fifty propositions summarizing its main points and crystallizing the relationship of capitalism to fundamental human values.… (more)

The Noblest Triumph: Property and Prosperity Through the Ages by Tom Bethell
A Humane Economy: The Social Framework of the Free Market by Wilhelm Röpke
The Cultural Contradictions Of Capitalism: 20th Anniversary Edition by Daniel Bell
Free to Choose: A Personal Statement by Milton Friedman
On the Principles of Political Economy and Taxation: Volume 1 (Works and Correspondence of David Ricardo) by David Ricardo
6 more
Development as freedom by Amartya Kumar Sen
What Should Economists Do? by James M. Buchanan
Planning for Freedom: Let the Market System Work by Ludwig Von Mises
Money Mischief: Episodes in Monetary History by Milton Friedman
The Consumer Society Reader by Juliet Schor
Economics of Good and Evil: The Quest for Economic Meaning from Gilgamesh to Wall Street by Tomáš Sedláček
Fewer