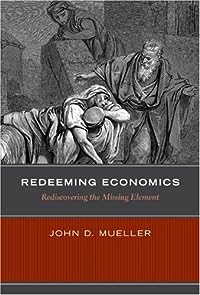 "Groundbreaking." --Washington Examiner Economics is primed for--and in desperate need of--a revolution, respected economic forecaster John D. Mueller shows in this eye-opening book. To make the leap forward will require looking backward, for as Redeeming Economics reveals, the most important element of economic theory has been ignored for more than two centuries. Since the great Adam Smith tore down this pillar of economic thought, economic theory has been unable to account for a fundamental aspect of human experience: the relationships that define us, the loves (and hates) that motivate and distinguish us as persons. In trying to reduce human behavior to exchanges, modern economists have forgotten how these essential motivations are expressed: as gifts (or their opposite, crimes).   Mueller makes economics whole again, masterfully reapplying the economic thought of Aristotle, Augustine, and Aquinas.  … (more)

A Humane Economy: The Social Framework of the Free Market by Wilhelm Röpke
Toward a Truly Free Market: A Distributist Perspective on the Role of Government, Taxes, Health Care, Deficits, and More by John C. Medaille
Human Goods, Economic Evils: A Moral Approach to the Dismal Science by Edward Hadas
Love and Economics: Why the Laissez-Faire Family Doesn't Work by Jennifer Roback Morse
The Commercial Society: Foundations and Challenges in a Global Age by Samuel Gregg
12 more
Wilhelm Ropke by John Zmirak
Poverty and wealth: The Christian debate over capitalism by Ronald H Nash
The Spirit of Democratic Capitalism by Michael Novak
Economics of Good and Evil: The Quest for Economic Meaning from Gilgamesh to Wall Street by Tomáš Sedláček
Planning for Freedom: Let the Market System Work by Ludwig Von Mises
"Are Economists Basically Immoral?": and Other Essays on Economics, Ethics, and Religion by Paul Heyne
Free to Choose: A Personal Statement by Milton Friedman
The Culture of the New Capitalism by Richard Sennett
Knowledge and Power: The Information Theory of Capitalism and How it is Revolutionizing our World by George Gilder
Capitalism and Freedom: Fortieth Anniversary Edition by Milton Friedman
Philosophy in the Middle Ages: The Christian, Islamic, and Jewish Traditions by Arthur Hyman
The Theory of Moral Sentiments (Glasgow Edition of the Works and Correspondence of Adam Smith, vol.1) by Adam Smith
Fewer