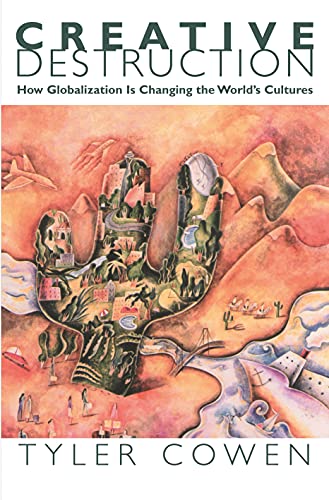 Creative Destruction: How Globalization Is Changing the World's Cultures

A Frenchman rents a Hollywood movie. A Thai schoolgirl mimics Madonna. Saddam Hussein chooses Frank Sinatra's "My Way" as the theme song for his fifty-fourth birthday. It is a commonplace that globalization is subverting local culture. But is it helping as much as it hurts? In this strikingly original treatment of a fiercely debated issue, Tyler Cowen makes a bold new case for a more sympathetic understanding of cross-cultural trade. Creative Destruction brings not stale suppositions but an economist's eye to bear on an age-old question: Are market exchange and aesthetic quality friends or foes? On the whole, argues Cowen in clear and vigorous prose, they are friends. Cultural "destruction" breeds not artistic demise but diversity. Through an array of colorful examples from the areas where globalization's critics have been most vocal, Cowen asks what happens when cultures collide through trade, whether technology destroys native arts, why (and whether) Hollywood movies rule the world, whether "globalized" culture is dumbing down societies everywhere, and if national cultures matter at all. Scrutinizing such manifestations of "indigenous" culture as the steel band ensembles of Trinidad, Indian handweaving, and music from Zaire, Cowen finds that they are more vibrant than ever--thanks largely to cross-cultural trade. For all the pressures that market forces exert on individual cultures, diversity typically increases within society, even when cultures become more like each other. Trade enhances the range of individual choice, yielding forms of expression within cultures that flower as never before. While some see cultural decline as a half-empty glass, Cowen sees it as a glass half-full with the stirrings of cultural brilliance. Not all readers will agree, but all will want a say in the debate this exceptional book will stir.… (more)

In Praise of Commercial Culture by Tyler Cowen
Capitalism and Freedom: Fortieth Anniversary Edition by Milton Friedman
The Morals of Markets and Related Essays by H. B. Acton
Human Action: A Treatise on Economics by Ludwig Von Mises
Free to Choose: A Personal Statement by Milton Friedman
9 more
Radicals for Capitalism: A Freewheeling History of the Modern American Libertarian Movement by Brian Doherty
Economics in One Lesson by Henry Hazlitt
The Logic of Collective Action: Public Goods and the Theory of Groups by Mancur Olson
Saving Capitalism from the Capitalists: Unleashing the Power of Financial Markets to Create Wealth and Spread Opportunity by Raghuram G. Rajan
The Great Transformation: The Political and Economic Origins of Our Time by Karl Polanyi
The Mind and the Market: Capitalism in Modern European Thought by Jerry Z. Muller
The Company of Strangers: A Natural History of Economic Life by Paul Seabright
Bureaucracy by Ludwig Von Mises
The Logic of Liberty by Michael Polanyi
Fewer