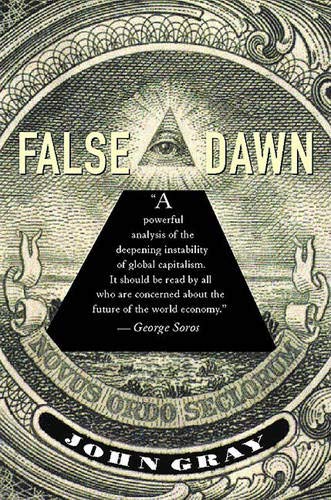 Hailed by Kirkus Reviews as both "a convincing analysis of an international economy headed for disaster" and a "powerful challenge to economic orthodoxy," False Dawn shows that the attempt to impose the Anglo-American-style free market on the world will create a disaster, possibly on the scale of Soviet communism. Even America, the supposed flagship of the new civilization, risks moral and social disintegration as it loses ground to other cultures that have never forgotten that the market works best when it is embedded in society. John Gray, well known in the 1980s as an important conservative political thinker, whose writings were relied upon by Margaret Thatcher and the New Right in Britain, has concluded that the conservative agenda is no longer viable. In his examination of the ripple effects of the economic turmoil in Russia and Asia on our collective future, Gray provides one of the most passionate polemics against the utopia of the free market since Carlyle and Marx.… (more)

The Enigma of Capital: And the Crises of Capitalism by David Harvey
23 Things They Don't Tell You About Capitalism by Ha-Joon Chang
Development as freedom by Amartya Kumar Sen
How Much is Enough?: Money and the Good Life by Robert Skidelsky