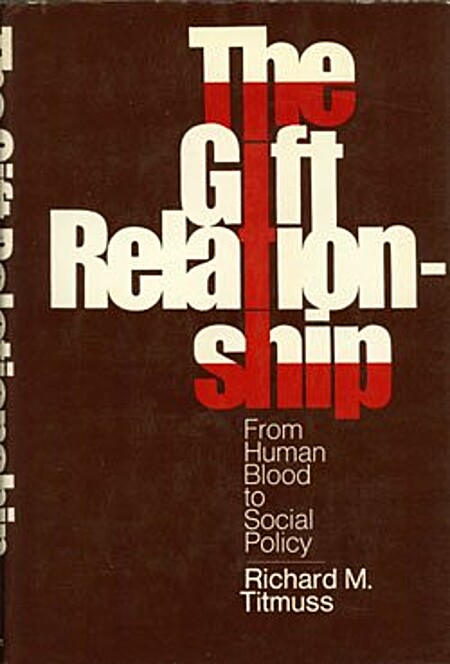 The Gift Relationship: From Human Blood to Social Policy

Richard M. Titmuss's The Gift Relationship has long been acknowledged as one of the classic texts on social policy. Honored by the New York Times as one of the ten most important books of the year when it first appeared in 1970, Titmuss's The Gift Relationship is even more topical now in an age of AIDS and changing health care policy. A seemingly straightforward comparative study of blood donating in the United States and Britain, the book elegantly raises profound economic, political, and philosophical questions. Titmuss contrasts the British system of reliance on voluntary donors to the American one in which the blood supply is largely in the hands of for-profit enterprises and shows how a nonmarket system based on altruism is more effective than one that treats human blood as another commodity. This updated edition contains the original text along with new chapters that: consider the relevance of Titmuss's arguments to the AIDS and current health care crises; outline recent developments in blood donation and transfusion systems; examine the systems for human milk donation; and assess the response to the original edition and make the case for its continuing relevance today. At a time when health and welfare systems are under sustained attack from many quarters, this new edition of The Gift Relationship is essential reading for everyone interested in social policy and the future of our society.… (more)

Social Transformation of American Medicine: the Rise of a Soverign Profession and the Making of a Vast Industry by Paul Starr
Social Theory and Social Structure by Robert K. Merton
Labor and Monopoly Capital: The Degradation of Work in the Twentieth Century by Harry Braverman
The Cultural Contradictions Of Capitalism: 20th Anniversary Edition by Daniel Bell
The Rise of the Meritocracy by Michael Dunlop Young