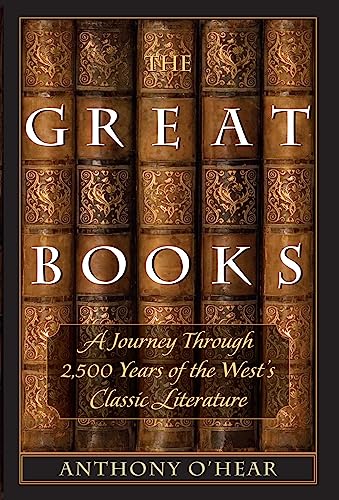 The Great Books: A Journey through 2,500 Years of the West's Classic Literature

"The Odyssey, Paradise Lost, The Canterbury Tales: great literature can be read by anyone, with a little help. The eminent British philosopher Anthony O'Hear leads the way with this captivating journey through two-and-a-half millennia of books as powerful, thrilling, erotic, politically astute, and awe-inspiring as any modern bestseller." "O'Hear begins with Homer, whose poems of epic struggle have made him the father of Western literature. After Greek tragedy, Plato, and Virgil's Aeneid comes Ovid, whose encyclopedic Metamorphoses is an inexhaustible source for European art and literature. Via Saint Augustine, O'Hear reaches Dante and his terrifying and sublime Divine Comedy. Chaucer, Shakespeare, Cervantes, Milton, Pascal, Racine, and finally Goethe complete the cast list. In each case, O'Hear patiently draws out themes, focuses on key passages, and explains why they are important." "Not simply a grand work of reference, The Great Books is also a narrative history shot through with a love of literature and the author's deeply held belief in its power to enrich and enliven everyone's world."--BOOK JACKET.… (more)

The Great Tradition: Classic Readings on What It Means to Be an Educated Human Being by Richard Gamble
Who Killed Homer? The Demise of Classical Education and the Recovery of Greek Wisdom by Victor Davis Hanson
Students Guide To Core Curriculum: Core Curriculum Guide by Mark C. Henrie
Great Books. My Adventures with Homer, Rousseau, Woolf, and Other Indestructible Writers of the Western World by David Denby
Climbing Parnassus: A New Apologia for Greek and Latin by Tracy Lee Simmons
3 more
Students Guide To Philosophy by Ralph M. McInerny
Student's Guide To Literature by R. V. Young
A Student's Guide to Political Philosophy by Harvey Claflin Mansfield Jr.
Fewer