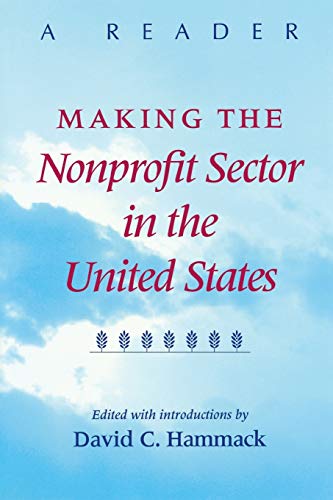 Making the Nonprofit Sector in the United States: A Reader

Making the Nonprofit Sector in the United States: A Reader

It is a delight to seen an anthology on nonprofit history done so well."--Barry Karl, John F. Kennedy School of Government, Harvard University This is a volume that everyone concerned about nonprofits--scholar, practitioner, and citizen--will find useful and illuminating."--Peter Dobkin Hall, Program on Non-Profit Organizations Yale Divinity School A remarkable book."--Robert Putnam, John F. Kennedy School of Government, Harvard University [One to come from John Simon, School of Law, Yale University by Jan. 13th and others are being solicited.] Unique among nations, America conducts almost all of its formally organized religious activity, and many cultural, arts, human service, educational, and research activities through private nonprofit organizations. Though partially funded by government, as well as by fees and donations, American nonprofits have pursued their missions with considerable independence. Many have amassed remarkable resources and acquired some of the most impressive hospital, university, performing arts, and museum facilities in the world. While some have amassed large endowments, many that surpass one billion dollars, there are also hundreds of thousands of small nonprofits, most with no tangible resources at all. How did the United States come to rely so heavily on nonprofits? Why has it continued to do so? What purposes do Americans seek to advance through nonprofits? How have Americans sought to control them? How have nonprofits been effected by the growth of government in the twentieth century? These questions suggest the complexity of the history of nonprofits in the United States. To help explore that history, this reader presents some of the classic documents in the development of the nonprofit sector along with important interpretations by recent scholars. The selections can be considered a representative part of a single extended conversation by the men and women who have taken part in the effort to defin… (more)