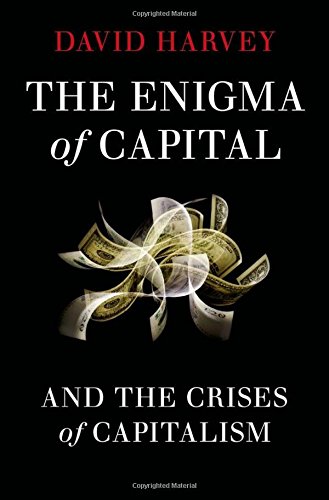 The Enigma of Capital: And the Crises of Capitalism

"Since the moment the deeply unsettling financial disaster erupted in September 2008, a crisis of confidence has gripped the economic mind. Experts of all stripes, from Alan Greenspan on down, were at a loss to explain what had happened. David Harvey saw this moment coming. A legendary scholar and critic of capitalism, he has been warning of problems for decades. Now, in The Enigma of Capital, Harvey provides a sweeping and brilliantly clear explanation of how the disaster happened, and how we can avoid another like it. Unlike other commentators, Harvey does not focus on subprime loans or mortgage securitization as the root cause of the calamity. Instead, he looks at something that reaches far deeper into the heart of capitalism--the flow of money through society. He shows how falling profit margins in the 1970s generated a deep transformation. With government assistance, capital was freed to flow across borders, and production moved to cheaper labor markets, depressing workers' incomes in the West. But as more and more money moved out of the laboring classes and into the pockets of the wealthy, a problem arose--how could the workers afford to buy the products which fueled the now-global economy? To solve this problem, a new kind of finance capitalism arose, pouring rivers of credit to increasingly strapped consumers. Moreover, these financial institutions loaned money to both real-estate developers as well as home buyers--in effect, controlling both the supply and demand for housing. But when the real-estate market collapsed, so did this financial edifice, an edifice that dominated our economy. We cannot afford to simply shore up this financial system, Harvey writes; we need to undertake a radical overhaul. With this landmark account, he offers a richly informed discussion of how we can turn our economy in a new direction--fairer, healthier, more just, and truly sustainable"--Publisher's description.… (more)

Debt: The First 5,000 Years by David Graeber
23 Things They Don't Tell You About Capitalism by Ha-Joon Chang