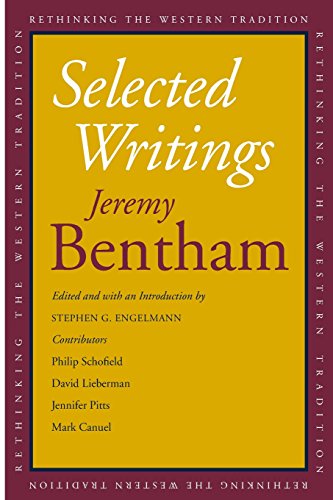 Jeremy Bentham (1748-1832), philosopher and reformer, is one of the most influential thinkers of the modern age. This introduction to his writings presents a representative selection of texts authoritatively restored by the Bentham Project, University College London. As well as more familiar pieces on utility, law, and politics/policy, highlights include the succinct essay "On Retrenchment" and a never-before-published treatise on sex. The volume is completed by major interpretative essays by Mark Canuel, David Lieberman, Jennifer Pitts, and Philip Schofield. The texts included in the book are:     -Sex     -An Introduction to the Principles of Morals and      Legislation, Preface and Chapters 1-5     -Place and Time     -Rationale of Judicial Evidence, Specially Applied to      English Practice, Book 1, Chapter 1     -Constitutional Code Rationale, Chapters 1 and 2     -Pannomial Fragments     -Panopticon, or, the Inspection-House, Letters 1, 2,      and 6     -Of Publicity     -Manual of Political Economy, Chapters 1 and 2     -Nonsense Upon Stilts (excluding the Observations      on Sieyes)     -On Retrenchment  … (more)

The Principles of Moral and Political Philosophy by William Paley
Aristotle: The Politics and the Constitution of Athens by Aristotle
A Theory of Justice by John Rawls