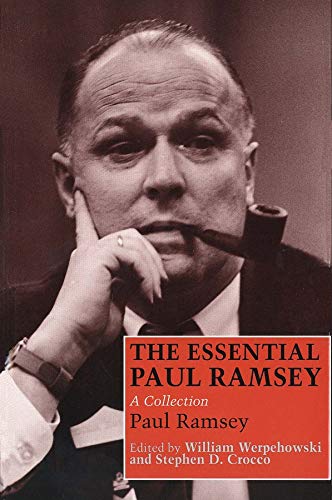 The Essential Paul Ramsey: A Collection

Paul Ramsey was one of this century's most important ethicists. From the publication of his classic Basic Christian Ethics in 1950 until his death in 1988, his writings decisively shaped moral discourse and reflection in the areas of theology, law, politics, and medicine. This collection of Ramsey's most important essays on Christian, political, and medical ethics displays the scope and depth of his vision, highlighting both the character of his theological commitments and the continuing significance of his work for the pressing moral problems of our day. Selections deal with such issues as race relations, sexuality and marriage, war, the meaning of Christian love, abortion, and medical care for the sick and dying. A general introduction by William Werpehowski and Stephen Crocco evaluates Ramsey's career and accomplishments and reviews contemporary criticism of his output and legacy. Shorter introductions to each selection point out crucial themes and lines of development in Ramsey's thought.… (more)