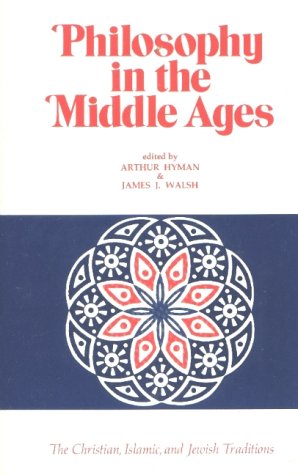 Philosophy in the Middle Ages: The Christian, Islamic, and Jewish Traditions

Thomas Williams' revision of Arthur Hyman and James J. Walsh's classic compendium of writings in the Christian, Islamic, and Jewish medieval philosophical traditions expands the breadth of coverage that helped make its predecessor the best known and most widely used collection of its kind. The third edition builds on the strengths of the second by preserving its essential shape while adding several important new texts--including works by Augustine, Boethius, Pseudo-Dionysius the Areopagite, Anselm, al-Farabi, al-Ghazali, Ibn Rushd, Bonaventure, Thomas Aquinas, and John Duns Scotus--and featuring new translations of many others. The volume has also been redesigned and its bibliographies updated with the needs of a new generation of students in mind.… (more)

The Consolation of Philosophy by Ancius Boethius
Medieval Philosophy: A New History of Western Philosophy Volume 2 by Anthony Kenny
A Treatise of Human Nature by David Hume