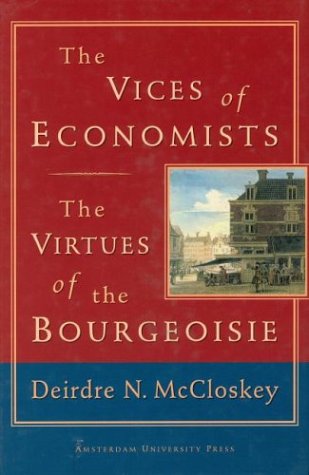 The Vices of Economists; The Virtues of the Bourgeoisie

The 'vices' are three bad habits into which economists have fallen over the past fifty years: bad statistics, bad theory, and bad applications of statistics and theory to public affairs. This book details the vices, tracing them to the influence of three giants of the 1940s and 1950s in economics, the Americans Lawrence Klein and Paul Samuelson, and the Dutchman Jan Tinbergen. McCloskey recommends a 'bourgeois', even feminine, virtue to replace the aristocratic and masculine vices of modern economics. She sees intellectual life as a bourgeois market of negotiating equals. What is good for a liberal democracy is good for intellectual life, she argues, even in the forbiddingly mathematical world of modern economics.

Economics of Good and Evil: The Quest for Economic Meaning from Gilgamesh to Wall Street by Tomáš Sedláček
In Praise of Commercial Culture by Tyler Cowen
Saving Capitalism from the Capitalists: Unleashing the Power of Financial Markets to Create Wealth and Spread Opportunity by Raghuram G. Rajan
False Dawn: The Delusions of Global Capitalism by John Gray
A Humane Economy: The Social Framework of the Free Market by Wilhelm Röpke
9 more
On the Principles of Political Economy and Taxation: Volume 1 (Works and Correspondence of David Ricardo) by David Ricardo
Mass Flourishing: How Grassroots Innovation Created Jobs, Challenge, and Change by Edmund S. Phelps
Animal Spirits: How Human Psychology Drives the Economy, and Why It Matters for Global Capitalism by George A. Akerlof
Human Action: A Treatise on Economics by Ludwig Von Mises
An Inquiry Into The Nature And Causes Of The Wealth Of Nations (Two Volume Set) by Adam Smith
Prophet of Innovation: Joseph Schumpeter and Creative Destruction by Thomas K. McCraw
The Capitalist Revolution: Fifty Propositions About Prosperity, Equality, and Liberty by Peter L. Berger
The Great Escape: Health, Wealth, and the Origins of Inequality by Angus Deaton
Capitalism, Socialism, and Democracy by J. A. Schumpeter
Fewer