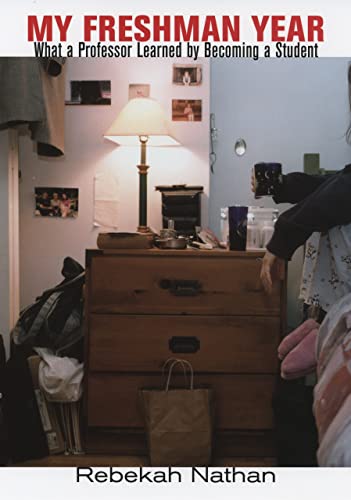 My Freshman Year: What a Professor Learned by Becoming a Student

After more than fifteen years of teaching, Rebekah Nathan, a professor of anthropology at a large state university, realized that she no longer understood the behavior and attitudes of her students. Fewer and fewer participated in class discussion, tackled the assigned reading, or came to discuss problems during office hours. And she realized from conversations with her colleagues that they, too, were perplexed: Why were students today so different and so hard to teach? Were they, in fact, more likely to cheat, ruder, and less motivated? Did they care at all about their education, besides their grades? Nathan decided to put her wealth of experience in overseas ethnographic fieldwork to use closer to home and apply to her own university. Accepted on the strength of her high school transcript, she took a sabbatical and enrolled as a freshman for the academic year. She immersed herself in student life, moving into the dorms and taking on a full course load. She ate in the student cafeteria, joined student clubs, and played regular pick-up games of volleyball and tag football (sports at which the athletic fifty-something-year-old could hold her own). Nathan had resolved that, if asked, she would not lie about her identity; she found that her classmates, if they were curious about why she was attending college at her age, never questioned her about her personal life. Based on her interviews and conversations with fellow classmates, her interactions with professors and with other university employees and offices, and her careful day-to-day observations, My Freshman Year provides a compelling account of college life that should be read by students, parents, professors, university administrators, and anyone else concerned about the state of higher education in America today. Placing her own experiences and those of her classmates into a broader context drawn from national surveys of college life, Nathan finds that today's students face new challenges to which academic institutions have not adapted. At the end of her freshman year, she has an affection and respect for students as a whole that she had previously reserved only for certain individuals. Being a student, she discovers, is hard work. But she also identifies fundamental misperceptions, misunderstandings, and mistakes on both sides of the educational divide that negatively affect the college experience. By focusing on the actual experiences of students, My Freshman Year offers a refreshing alternative to the frequently divisive debates surrounding the political, economic, and cultural significance of higher education--as well as a novel perspective from which to look at the achievements and difficulties confronting America's colleges and universities in the twenty-first century.… (more)

Our Underachieving Colleges: A Candid Look at How Much Students Learn and Why They Should Be Learning More by Derek Bok
Making the Most of College: Students Speak Their Minds by Richard J. Light
Coming of Age in New Jersey: College and American Culture by Michael Moffatt
Clueless in Academe: How Schooling Obscures the Life of the Mind by Gerald Graff
I'm the Teacher, You're the Student: A Semester in the University Classroom by Patrick Allitt