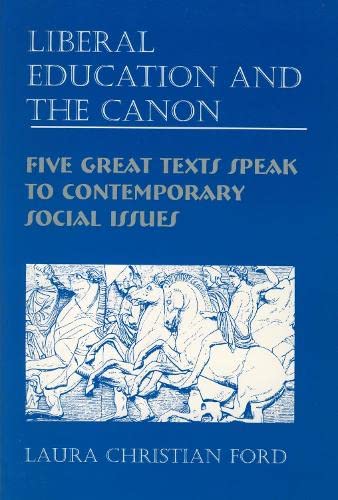 Liberal Education and the Canon offers an argument for maintaining the traditional literary canon of the West as the centrepiece of a liberal arts education, from the perspective of a liberal, feminist, mainstream academic administrator. Laura Ford argues that to equate the great texts of the Western tradition with conservatism is to confuse the ideology of the texts; she undertakes to rebut the allegation of obsolescence by showing the prevalence of many contemporary liberal themes in the traditional canon.The book demonstrates the continuing relevance of five works of the Western tradition (Homer, Plato, the King James Bible, Shakespeare, and the American founding documents) to several of society's most complex and divisive social issues: sexual harassment, rape, homophobia, abortion, the 'right to die' and the death penalty. Each chapter illustrates dramatically how these traditional literary works capture some of the basic human struggles and dilemmas that have not greatly changed over the centuries.… (more)