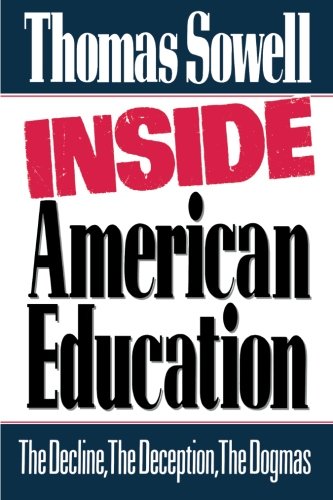 Inside American Education: The Decline, the Deception, the Dogmas

Our educational establishment - a vast tax-supported empire existing quasi-independently within American society - is morally and intellectually bankrupt, charges distinguished economist and social critic Thomas Sowell. And in this top-to-bottom tour of the mismanaged institutions, cynical leadership, and tendentious programs of American education, Sowell exposes the numerous "deceptions and dogmas" that have concealed or sought to justify the steep and very dangerous decline in our educational standards and practices across the board. Among the more serious ills of American education are the technically sophisticated brainwashing techniques now being applied to children and teenagers in so-called "affective education" programs; the special "peace" and "nuclear" education programs that actively promote "politically correct" attitudes; the "values clarification" and sex education curricula that portray parental and religious authority figures as agents of a repressive and unjust social and political orthodoxy; and the racial "mini-establishments" created on college campuses by minority demagogues and complaisant administrators that enshrine a self-serving ideological double standard, thus betraying the real interests of minority students. Sowell's exhaustively researched investigation draws particular attention to the wide array of textbooks and other instructional materials, promoted with astonishing success by a multi-million dollar industry styling itself a "secular humanist" movement, which fosters these ideas - ideas that are not just anti-American, Sowell maintains, but essentially totalitarian in character. These sinister curricular developments, combined with often cowardly and irresponsible management more concerned about institutional image and ranking than with fiscal integrity or a commitment to educate our youth, will breed disaster unless immediate steps are taken to reform the entire educational system.… (more)

The End of Education: Redefining the Value of School by Neil Postman
Real Education: Four Simple Truths for Bringing America's Schools Back to Reality by Charles Murray
The Closing of the American Mind: How Higher Education Has Failed Democracy and Impoverished the Souls of Today's Students by Allan David Bloom